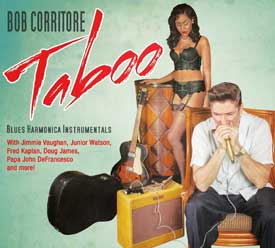 Bob Corritore steps up his game with Taboo, and all-instrumental platter, which best captures the seasoned wisdom of his ever-expanding harmonica prowess. The album highlights and explores the beauty of blues harmonica with a mostly original, brilliantly diverse repertoire, marked by a decidedly noteworthy cast of supporting musicians including Jimmie Vaughan, Junior Watson, Fred Kaplan, Doug James, Papa John DeFrancesco, Richard Innes and others. Chock-full of enticing grooves, captivating moods and charming melodies, Taboo is simply a joy to behold, a sentiment echoed by world-renowned harmonica virtuoso Charlie Musselwhite, who acknowledges that, “Not many people can do an all instrumental harp CD and keep it interesting all the way through. You’ve got a dandy CD here. A real treat.”

Born and musically groomed in the blues heartland of Chicago, Bob Corritore relocated to Phoenix in the 1980s and has since created a thriving musical home-base in the Southwest. In addition to owning and operating Phoenix’s premier blues and roots venue, The Rhythm Room, as well as hosting his weekly radio program Those Lowdown Blues on KJZZ, Corritore has racked up countless hours of experience in his role as producer on numerous recording projects by Little Willie Anderson, Louisiana Red, Henry Gray, Robert Lockwood, Jr., and Big Pete Pearson, among others. Ever mindful of playing in service to the song rather than resorting to histrionics, Corritore has been quite content to work as an accompanist or sideman, continually honing and developing his craft, while always maintaining an emphasis on achieving a cohesive ensemble sound.

Over the last decade Corritore’s profile has continued to rise, thanks in part to a series of spectacular releases including his Blues Music Award-winning album Harmonica Blues and other recent collaborations on Delta Groove with Tail Dragger and John Primer. Harmonica Blues took the BMA’s top honor for Historical Album of the Year in 2011, while Corritore additionally earned two nominations for Instrumentalist-Harmonica in 2011/13 and was named “Most Outstanding Musician (Harmonica)” in the 2012 Living Blues Award Reader’s Poll. On his subsequent recordings for Delta Groove, Corritore has continued to progress beyond his role as a consummate producer and impromptu sideman, to a burgeoning artist and flourishing performer. Always striving to push himself to greater heights, Corritore’s previous recording Knockin’ Around These Blues with Chicago guitarist John Primer was his greatest accomplishment yet, further validated by Germany’s Blues News Magazine, who declared it the “Best Blues Release of 2013.”