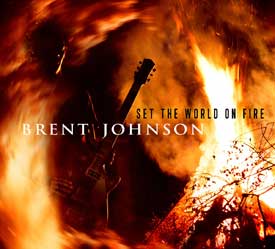 New Orleans-based blues/rock guitarist Brent Johnson debut album, Set the World on Fire features his road-tested band of Bill Blok (bass, backing vocals), John Perkins (drums) and Wayne Lohr (keyboards), along with special guest guitarists Alvin Youngblood Hart, who adds his scintillating touch on three tracks, and legendary slide master Sonny Landreth on one song. Set the World on Fire was produced by Brent Johnson and recorded/mixed by Ben Lorio at The Music Shed in New Orleans.“My sound is rooted in the blues, though I don’t pretend to be a purist, and I don’t want to be,” Johnson explains. “I write music based on my experiences and the sounds I grew up with;
I never want to pretend that I had the same experiences as the old bluesmen did, so I’m not going to go around trying to sound like them. What I do is put the emphasis on the feeling of the music, the passion, the urgency, the directness – that’s the goal.”

Brent Johnson has achieved his goal quite admirably on the appropriately-titled Set the World on Fire, as he burns up the speakers with an incendiary mix of both electric guitar and slide guitar sounds on the album’s 11 cuts, including seven originals and covers of “Meet Me in the Morning” (Bob Dylan), “Meet Me in the Bottom” (Howlin’ Wolf), “As the Years Go Passing By” (Albert King) and “The Hucklebuck” (Paul Williams).

Johnson’s passionate vocals and soulfully powerful guitar work shines throughout the new album. On “Meet Me in the Morning,” he and Alvin Youngblood Hart trades licks in a serious blues guitar conversation (Alvin on electric, Brent on slide). They go at it again on the original song, “The Ticket,” driving home a strong blues message. On “Long Way Back to New Orleans, he’s joined by Sonny Landreth, who adds his signature slide guitar, helping to push the track towards his Crescent City hometown. Hart returns one more time on the Howlin’ Wolf classic, “Meet Me in the Bottom,” where both he and Brent channel the chugging sounds made famous by the Wolf’s iconic guitarist, Hubert Sumlin.

On an album filled with highlights, two additional songs are also worth mentioning. On “As the Years Go Passing By” (perhaps best-known from the great Albert King’s version), Johnson delivers a tour-de-force 13 minutes-plus of emotionally-charged singing and guitar playing that adds to the track’s intensity. And on “The Hucklebuck” (a 1949 number one R&B hit by saxman Paul Williams), Johnson shows he can swing and rock with the best of them on an instrumental that showcases his versatility and musical maturity as a guitar player.

A guitar prodigy from the age of four, South Texas born Brent Johnson always knew where he wanted his playing to take him. Drinking in the very best of blues, jazz, rock, punk, country and world music, by the time his family moved to New Orleans in his teens, he was predestined towards a career in music.

Writing his own material, Brent formed several high school bands, all with a lean to the blues; and then joined the group Under the Gun, who built a considerable following on the local live circuit in Louisiana and beyond. As admiring of the style of The Clash, Albert King, Charlie Parker, Jimi Hendrix, Albert Collins or Black Flag and Thelonious Monk, Brent’s passion for playing was immediate and intense for his audience.

By serendipity, New Orleans’ legendary “Braille Blues Daddy” Bryan Lee heard Brent’s playing and immediately recognized his virtuosity, drive and dedication to his craft and to the blues. At 22, Brent was seconded into Bryan Lee and the Blues Power Band, with whom he has recorded and toured nationally and internationally for the past ten years.