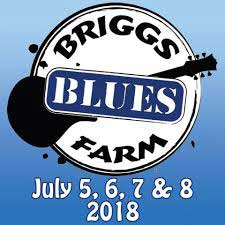 (NESCOPECK, RI) – From July 5 through 8, a lush green farm in Nescopeck will take on shades of another hue for the 21st annual Briggs Farm Blues Festival.

Featuring 21 international and regional acts, the festival offers a powerhouse of talent, ranging from delta-style blues to soulful bands to the next generation of players apt to sprinkle funk into the mix. This year’s star power includes Grammy Award-winner Mike Farris, folk-blues artist Amy Helm (daughter of The Band’s famed drummer Levon Helm) and hard-driving, blues guitarist Samantha Fish, a rising star on the national scene.

Keeping with tradition, the festival also showcases Luzerne County-based musicians as well, including Teddy Young & The Aces and Ed Randazzo & Friends. Both bands have been regulars at the festival in recent years.

Since its humble debut in 1998 — then featuring only six acts on one stage — the festival consistently has grown in size and stature. It now offers camping packages in a wooded area of the 250-year-old farm, three stages, a variety of vendors and an array of tasty treats, including soul food like jambalaya, fried catfish, collard greens and locally grown corn.

The festival also will have drawings for guitars and amplifiers — including a C.F. Martin guitar — to raise money for the Beyond Violence Inc. women’s shelter and counseling center in Berwick. The tradition started four years ago because of the increased incidence of domestic violence in the region.

The music, as always, is the main draw for the 10,000 fans expected this year over the four days. Briggs veteran Vanessa Collier, a Berklee College of Music grad who deftly integrates the saxophone into her blues act, will introduce her new album, “Honey Up,” when she takes the stage July 6. Her funk-rock-soul fusion netted her two Blues Music Awards this year.

Blues purists should appreciate the guitar work of Shawn Holt & the Teardrops. Holt is the son of the late Magic Slim, who slipped away from Mississippi’s cotton fields decades ago to tour nationally and earned numerous blues awards along the way.

The blazing harp of Briggs veteran Dustin Arbuckle will leave fans wanting for more, and the Swampcandy band from Annapolis, Md., will sing tales of whiskey drinking, strong women and plans gone awry. A well-rounded blues festival offers tales from the soul’s underbelly, and Swampcandy won’t let patrons down.

It all begins Thursday evening, July 5, at the Stage in the Woods, when the festival opens to four-day campers and three- and four-day ticket holders with The Mighty Susquehannas & Friends. Patrons comfortable in lawn chairs can enjoy the Bloomsburg-based band playing blues made famous by Eric Clapton. This is the only performance scheduled on that stage.

The actual festival grounds open at noon Friday, July 6, and the music kicks off at 1:40 p.m. with the Gabe Stillman Band on the Back Porch Stage. That stage is an intimate setting replicating the backdrop where bluesmen from the 1900s played their music to appreciative field hands.

Five bands will play the Back Porch Stage on Friday, July 6, and six bands will grace the platform on Saturday, July 7. Four national acts are scheduled for the Main Stage both nights.

Sunday’s July 8 show features gospel blues, which the festival describes as a “vehicle of hope and redemption.” The first act at 11 a.m. of the abbreviated day is Ed Randazzo & Friends, which includes accomplished Wyoming Valley string musician Bret Alexander (formerly of the Badlees). Backed by a strong band that includes Lehigh Valley-based violinist Nyke Van Wyk, Randazzo’s deep vocals can take on the roar of a fiery preacher, a seasoned storyteller or a gravelly Bob Dylan.

Closing the show is Mike Farris & The Roseland Rhythm Review. Farris won a Grammy Award for best roots gospel album in 2015 for his work, Shine For All the People. With the looks of a rock star fueled by a spirit thankful to have survived addiction, Farris embodies the power of the Gospel in his music, according to his website. Farris has said his music is and “always has been first and foremost for the downtrodden, the wayward people who’ve had to go up the rough side of the mountain.”

With his message of hope and salvation — delivered through soulful voice — the Nashville-based award winner will leave fans feeling better about themselves and their lives. Briggs closes the gates at 4 p.m. July 8.

Then fans will be left to wonder what 2019’s 22nd annual Briggs Farm Blues Festival will offer.