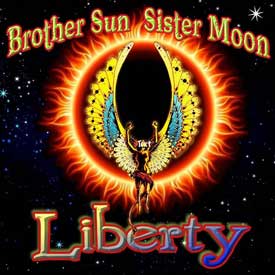 Liberty, the sophomore album from Dave Lambert and Donna Dahl, a.k.a. Brother Sun Sister Moon are twain, like minded musically and spiritually in that they share a common goal of giving what has so generously been given to them in talent and opportunity.

Speaking in terms of blues, funk and electric guitar grooves, the two songwriters have effectively reached out to new levels with Liberty. Laced with vocal harmonies and musicianship which excels in the blues roots genre, it surpasses the duo’s own previous exploits.

Their magic is alive and kicking …a treat for all music lovers and blues aficionados. Liberty incorporates performances from Big George Jackson and lyrical content from Pulitzer Prize winner Maurice Manning.

Brother Sun Sister Moon will be following up with tour dates and appearances throughout the US. For a full schedule please visit bluesmotivators.com.

What people are saying:

“The guy is a great musician and songwriter …gives his heart and soul every time  I’ve seen him while the rest of the band joins right in with the same humble passionate manner, rockin everybody from start to finish… ”

“I’m of the opinion that there’s nothing on guitar that Dave Lambert cannot do. ….Donna Dahl plays drums with unmatched dynamics.”

“There’s an intensity to what they’re doing. It’s like all hell breaks loose….One of the things about their music that I’ve found extremely captivating is that it’s just a real, raw sound.”

“As a guitar-drums duo called Brother Sun Sister Moon, their rare setup, raw sound, and palpable chemistry on stage set them apart in April at the Road to Memphis in St. Paul.”

“Brother Sun Sister Moon did what they do, continuing to build that huge fan base of converts. …No matter where I catch them, I seem to be standing next to a newbie who says, ‘How can two people have such a full sound?’ I just smile…”

“….get out to see their outstanding live show soon!”