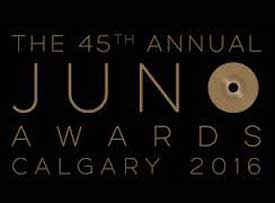 CALGARY, ALBERTA, CANADA – The 2016 JUNO Awards and JUNO Week celebrations from March 28 – April 3, 2016 will be hosted by Calgary, Alberta. The JUNO Awards, Canada’s music awards, has evolved from an industry awards event to a weeklong festival that travels city to city across the country. It encompasses both public-facing fan events and industry/networking opportunities featuring a diverse array of Canadian artists and emerging talent. The JUNO Awards were created to celebrate and promote Canadian music and artists.

In 2002, The JUNO Awards went on the road to take the music to the fans and expanded its scope to include a series of public and private events outside of the Awards broadcast. Each host city has embraced their opportunity to support the JUNO Awards and build an enduring legacy of music programs in their market.

Showcasing a new host city and their music scene each year, JUNO Awards “On The Road” has been an enormous success with measurable economic, public relations and artist development impact in all of the markets visited to date. The JUNO Week events include JUNO Songwriters’ Circle, JUNOfest, JUNO Fan Fare, JUNO Cup, and more!