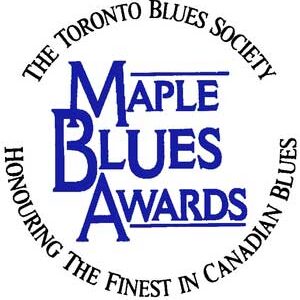 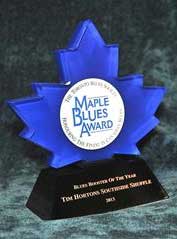 (Toronto, ON, CA) – Canadian blues artists from coast to coast have been honored with nominations for the 20th annual Maple Blues Awards, being held on January 23rd at Koerner Hall in Toronto.

There are several first-time nominees including 17-year old newcomer Spencer MacKenzie, Andre Bisson, Blue Moon Marquee, Debra Power, and Mark Crissinger for New Artist of the Year. There are several acts from across the country that each received two nominations. A full list of nominees is below.

The nominees, selected by a panel consisting of industry professionals from across Canada, are recognized both for their talent as well as their contribution to the growing Canadian blues music scene.

The 20th annual Maple Blues Awards will be hosted by award-winning multi-instrumentalist, bandleader, sideman and producer Steve Marriner of MonkeyJunk, and will feature performances by a half dozen nominees from all parts of Canada, all backed by the all-star Maple Blues Band led by Gary Kendall.

Tickets for the Maple Blues Awards, held at the Royal Conservatory’s Koerner Hall in Toronto, are on sale now for $45 – $80 and can be purchased at The Weston Family Box Office, located in The Royal Conservatory building at 273 Bloor Street West, Toronto, by phone at RCM box office (416) 408-0208 or online. TBS Members, Nominees and Blues Summit Eight Delegates can purchase best available seats for $35.

Voting will open November 1 at 11:59pm Newfoundland Daylight Time (10:29pm EST). Blues fans can vote online for their favorite blues musicians in the eligible categories until December 1. Register at www.mapleblues.ca.

Entertainer of the Year

Electric Act of the Year

Acoustic Act of the Year

Male Vocalist of the Year

Female Vocalist of the Year

New Artist of the Year

International Artist of the Year

Guitarist of the Year

Harmonica Player of the Year

Piano/Keyboard Player of the Year

Horn Player of the Year

Drummer of the Year

Bassist of the Year

Songwriter of the Year

Blues With A Feeling (lifetime achievement)

The Toronto Blues Society is a non-profit membership organization dedicated to the promotion and preservation of the Blues. The Maple Blues Awards is Canada’s national blues awards program. Its goal is to promote blues music across Canada and to recognize outstanding achievement in the field.

Located along the Bloor Street cultural corridor, The Royal Conservatory of Music is one of the largest and most respected music performance and arts education institutions in the world. Its breathtaking Koerner Hall, “the jewel in the crown of Toronto’s Cultural Renaissance,” along with two other concert spaces, presents 70+ concerts annually from acclaimed classical, jazz, pop, and world music and hosts an additional 100+ concerts and events from a wide range of not for profit arts groups, charities, and corporate clients.