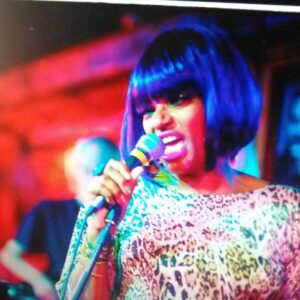 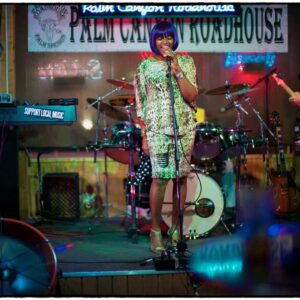 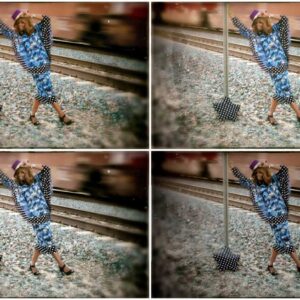 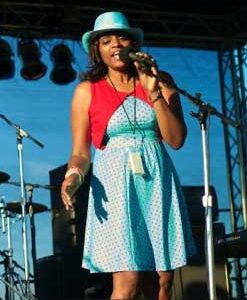 Throughout much of her life, Carolyn Gaines has been a significant part of the blues world. She has taught a countless number of children about the blues in her Blues Schools programs, written many articles about the blues greats, interviewed late great B.B. King, Guitar Shorty, Eric Johnson, Kenny Wayne Shepherd, Cyril Neville, Buddy Guy’s guitarist  Ric Hall, Sonny Landreth, Robert Cray, her uncle Grady Gaines, and her father Roy Gaines, produced performances, worked on publicity and radio promotion, dealt with labels and festivals, and been a spokesperson for the ‘Blues’ music on many levels. Now, after many experiences, she is emerging as an important new blues singer.

Inspired by such giants as Buddy Guy (in addition to loving his music, Carolyn and Guy share a love for polka dots in their outfits), Bessie Smith, Ma Rainey, Koko Taylor, Etta James, Blind Boy Fuller, B.B. King and Bobby Blue Bland among others, Carolyn Gaines has her own distinctive deep, bone-chilling, raw, southern voice and style. Her singing is both very musical and filled with the raw feeling of the blues. She knows about what she sings and puts plenty of feeling into her powerful performances along with her own spirit and attitude.

The next best thing to experiencing Carolyn Gaines live in concert is to watch some of her You Tube videos. Start with her unaccompanied version of Buddy Guy’s “Feels Like Rain,” a performance that is both gutsy and full of charm. Of her other videos, be sure to check out her powerful and expressive long notes on “Stormy Monday,” a version of Otis Redding’s “I Got Dreams” that has the feel of country blues with Ms. Gaines accompanied solely by guitarist Gary Mays, a rockish “The Thrill Is Gone,” and a full-band version of Buddy Guy’s 2016 Grammy winner song, “Born To Play Guitar.” She is currently planning her first full-length CD. As the singer says at the end of Guy’s “Feels Like Rain,” “That’s the blues, I love you blues.”

Carolyn Gaines was born into the blues as the daughter of the great guitarist-singer Roy Gaines who was superstar Diana Ross and Billie Holiday’s guitarist. In addition, her uncle is saxophonist Grady Gaines who worked with many top names including Diana Ross & The Supremes, Gladys Knight, Little Richard and Sam Cooke.

“I was born in Houston, Texas. Early on my father played me Bessie Smith records (Smith’s biography book) and that was my introduction to learning about the blues,” say Ms. Gaines. “I always sang to records as a child. I loved Natalie Cole’s ‘Mister Melody,’ Peabo Bryson, Billie Holiday and especially Diana Ross. I loved her music, voice, fashion and style. She was always glamorous and classy and I wanted to be like her. I practiced singing along to records over and over. I would wait for my father to go to his gigs around 7pm and then from seven till midnight I would listen to records from his collection and practice.”

As a youth, Ms. Gaines sang at some of her father’s club dates along with her brother and sister. However, singing eventually took a back seat to her work in the blues business. After majoring in theatre arts in college, she managed her father’s career starting in the early 1990s. She booked Roy Gaines at blues festivals and clubs, traveling around the world. She hosted, created and produced blues cable television about Muddy Waters, Buddy Guy, Ike Turner, Roy Gaines, Jackson 5’s, Diana Ross and she would always play Buddy Guy, B.B. King, Roy Gaines, Shemekia Copeland’s CD’s on her radio shows.

And she began to teach.

“I remember going to Audubon Middle School and talking to the students. I asked the kids, if they had heard of Roy Gaines. Only two of the 60 students raised their hand, and no one had heard of B.B. King, Buddy Guy, Muddy Waters or even Carlos Santana.” Carolyn Gaines saw a real need and she formed what became the Blues Schools program. She put together blues presentations for students, taught classes about the blues and during the past 16 years has produced over 3,000 projects for the kids. “In history classes about the blues I talked about what the performers’ lives were like and about their struggles and joys. I taught kids how to write their own lyrics and I built blues displays, featuring everyone from Leadbelly to Blind Lemon Jefferson, Blind Boy Fuller, Buddy Guy, and Ma Rainey. I brought a lot of the local bands in to perform for the children. Sometimes I would sing, too.” Los Angeles Wave Newspaper called her father Roy Gaines “the King of performing Blues for the California children,’ while his daughter Carolyn Gaines is the President of the Blues Schools Program.”

She exposed students from Los Angeles, Pasadena, Legendary Rhythm & Blues Cruises/Roger Nabors, Palm Springs and throughout Southern California to the blues not only through her storytelling and teaching but by having the youths experience direct contact with blues greats. She accompanied the kids to concerts at the Hollywood Bowl, the Cerritos Center Performing Arts, the Greek Theatre, the Disney Center and elsewhere by the likes of B.B. King, Keb’ Mo’, Guitar Shorty, Buddy Guy, Shemekia Copeland, Ray Charles, Taj Mahal and Roy Gaines. Some of the artists also visited the schools. “Ike Turner would go to the schools with his whole band. In addition to doing a concert for the children, he donated guitars to the school along with autographed pictures,” says Carolyn.

In 2012, Carolyn Gaines’ first children’s book (Blues…Why Blues & Latin Music?) was released, gaining very positive reviews for the information she provided about the blues legends along with the illustrations. She has many more children’s books ready to be published.

2014: Ric Hall, who is Guy’s guitarist, produced three tracks for Carolyn Gaines: ”Feels Like Rain”, ”Ain’t No Sunshine”, and ”Mr. Dill Pickle.” Carolyn Gaines, artist and composer, produced, and recorded her own vocals on ”Guess What,” and ”Let Me Show You,” which are Buddy Guy’s ex-recordings.

2015: Carolyn was groomed by Leon Levy and Chan Romero, who together collaborated in the recording studio on two songs: ”I Want Your Money, Honey” and “Monkey.”  Chan Romero discovered blues singer Carolyn at Elvis Presley’s mansion. Romero and Gaines sang at the King of Rock n’ Roll; Elvis Presley’s 80th Birthday Party.

Having become a very important Renaissance Blues Woman, now it is time for the emergence of Carolyn Gaines, Blues Singer. She has gained a lot of experience through the years sitting in with musicians and appearing at many venues including Barbara Morrison’s club in Los Angeles and the Blythe River Blues Festival. “I call myself a closet blues singer because, although for the past 16 years I have been teaching about the blues, I have processed an awful lot of music. I’ve been singing privately for many many years and I’m out of the closet now! I was born in the blues, worked in the blues, educated kids about the blues, and now I sing the blues.”

The blues world looks forward to hearing much more of Carolyn Gaines’ singing in the future.

Scott Yanow, jazz and blues journalist/historian, has written hundreds of liner notes and 11 books including The Jazz Singers and Jazz On Record 1917-76