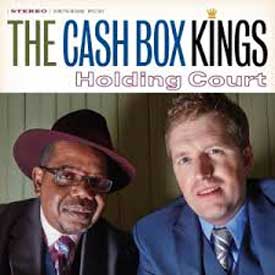 On Holding Court, award-winning fan favorites The Cash Box Kings continue their mission of carrying on the spirit of the 1940’s and 50’s post-war Chicago blues sound as well as the Delta blues music of the 20’s and 30’s. Living Blues said they are simply “one of the best blues bands in the land.”

But these illustrious torchbear­ers also add a bravado, energy and freshness to the mix that results in a distinctive musical expe­rience. With a focus on the raw, stripped-down, ensemble playing that was the hallmark of the post-war sound, the band showcases the music of Chess Records and Sun Records while add­ing a healthy dose of original music that captures the essence of early Memphis and Chicago blues sounds. As No Depression put it, “The ghosts of Muddy Waters, Hubert Sumlin, Pinetop Perkins and Little Walter must be smiling.”

The Cash Box Kings are fronted by Joe Nosek, who writes and arranges songs, sings, and channels the spirits of Little Walter and Slim Harpo on harmonica, and singer and songwriter Oscar Wilson, a 6’3”, 300 hundred pound Muddy Waters-type throwback to the heyday of the Chicago blues scene.

No less a blues authority than Charlie Musselwhite said, “The Cash Box Kings play with taste and feel and it was faith restoring to know there are guys out there that still know and appreciate real blues.”

On Holding Court The Cash Box Kings pay homage to some of the founding fathers and lesser-known artists of the Chicago blues scene, and they also throw some New Orleans, jump blues, ragtime, and swamp pop sounds into the mix. While the subject matter of many of the songs is familiar, they also touch on current issues such as the challenges of selling records and staying financially afloat in the era of digital piracy and streaming services, and the real struggle faced by many who are forced out of their neighborhoods due to the gentrification taking place in inner-city areas of Chicago and other urban centers in the U.S.

Rock And Roll Hall Of Famer Elvin Bishop To Appear On CONAN TV show May 11 Ian Siegal :: THE PICNIC SESSIONS