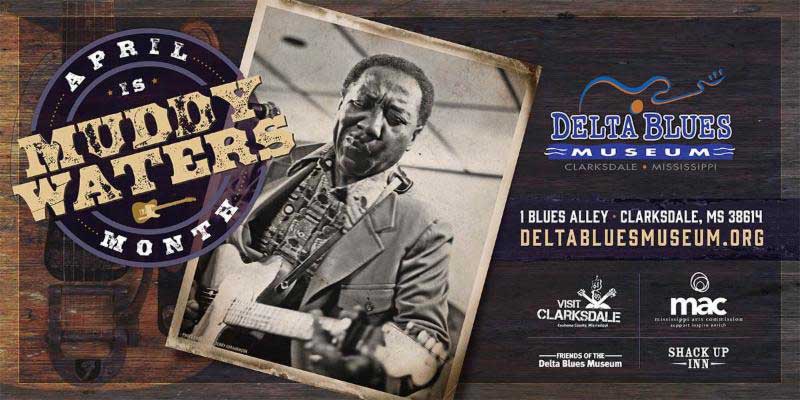 CLARKSDALE, MS – Special museum events and exhibits will be running throughout the month of April at the Delta Blues Museum in Clarksdale, Mississippi.

Open to the public at Delta Blues Museum; cupcakes free while supplies last.

Blues artist/educator leads the discussion.
In the Delta Blues Museum classroom; open to the public.

Memphis blues and rock legend shares stories from his book. The Gift Shop will have copies available for purchase, as well as CDs by the artist.

In the Delta Blues Museum classroom; open to the public.

McKinley Morganfield–better known as Muddy Waters–is one of the most powerful forces behind American music today. Muddy was born on April 4th, 1913, in the Delta near Rolling Fork, Mississippi, and later moved to Clarksdale, where he worked and lived on Stovall Plantation. The son of a talented bluesman, Muddy taught himself to play bottleneck slide guitar as a teen; a chance recording with Alan Lomax inspired Muddy to become a full-time musician.

Playing with Son Sims around the Mississippi Delta, in Memphis and in St. Louis, Muddy eventually found his musical home in Chicago, where he signed with Chess Records and changed the game by electrifying the blues. He scored 15 hits in the 1950s alone, effectively creating the sound known as “Chicago blues,” a sound that immediately resonated with aspiring young musicians like Paul Butterfield and Johnny Winter. Muddy took his amplified sound overseas to Europe, where his musical shockwaves started a revolution that continues today, through the artists he influenced-most notably Eric Clapton, Jimmy Page and The Rolling Stones, who took their name from a Muddy Waters song.

Established in 1979 by the Carnegie Public Library Board of Trustees and re-organized as a stand-alone museum in 1999, the Delta Blues Museum is Mississippi’s oldest music museum. A 2013 recipient of the IMLS National Medal for Museum and Library Services–the nation’s highest honor for museum and library service to the community–and a 2014 recipient of the National Arts & Humanities’ Youth Program Award, the Delta Blues Museum is dedicated to creating a welcoming place where visitors find meaning, value and perspective by exploring the history and heritage of the unique American musical art form, the Blues. The Museum is also recognized as a Great River Road Interpretive Center.

For more information on events or programs, please call (662) 627-6820, or visit the Museum web site at www.deltabluesmuseum.org.