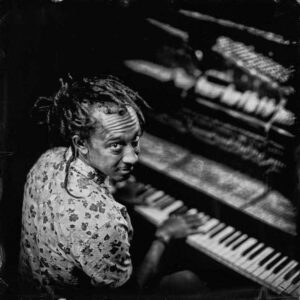 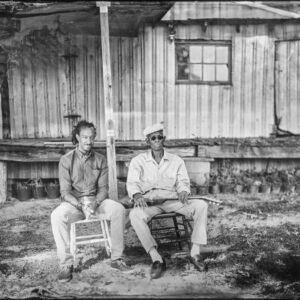 (North Bethesda, MD) – The Piedmont Blues, a Dec. 10 concert at Strathmore (5301 Tuckerman Ln, North Bethesda, Maryland) by jazzman Gerald Clayton and The Assembly, combines jazz, traditional buck dancing and photography in an homage to the blues and the African American culture of the tobacco-producing states of the Southeast.

To those who have only heard the blues of the Mississippi Delta and Chicago or its musical descendants in rock music, the rolling rhythms of the Piedmont blues may sound surprisingly gentle, even somewhat subdued. The listener might not immediately recognize the blues in a guitar style that often sounds rooted in ragtime. And the name of the style is even a bit of a geographic misnomer as its musicians also hail from areas that surround the Piedmont, the Appalachians and the coastal planes.

However, this beautiful folk style, with its intricate guitar work, holds an influential place in American music. Guitarists Elizabeth Cotten, Josh White and Brownie McGhee and harmonica player Sonny Terry all left an indelible mark on the 1960s folk music boom, while the popular string band the Carolina Chocolate Drops preserves the black musical traditions of the region. And right here within the Beltway, John Jackson, John Cephas and Archie Edwards all performed variants of the style as they learned it in rural Virginia.

Surprisingly, the concert work, commissioned by Duke University in Durham, N.C., revolves not around a lone guitarist but rather a pianist, Gerald Clayton, and his jazz band The Assembly, with singer Rene Marie, dancer Maurice Chestnut and a gospel choir, Patrick Lundy and the Ministers of Music.

For composer Clayton, a four-time Grammy nominee, the blues of the Piedmont was both a destination and a point of musical departure. The piece attempts to tell the story of the blues through modern jazz and perhaps reclaim its history and story — to embrace its original context as a music of both struggle and hope.

“Part of the story is that struggle of the music continues with each generation,” said director Christopher McElroen. “[In the music] you’ll hear strains of ‘Step It Up and Go’ [by Blind Boy Fuller] or ‘Freight Train’ [by Elizabeth Cotten] but in a modern context.”

Both Clayton and McElroen emphasize that this isn’t a “greatest hits” of the Piedmont blues.

“Luckily, the sound that we associate with the Piedmont guitar style comes from stride piano, where the left hand plays a bass note then a chord and the right hand plays the melody,” Clayton said. “But I’m also not simply trying to do my best Piedmont blues expression. I’m trying to tell a story through our lens and language.”

Describing the concert format, McElroen said, “The piece will start with the gospel choir coming out on stage and voices searching. Through that Rene Marie’s voice will come out on top. At some point, it leads into a spoken word piece about the struggle of people in this region. So there is a progression from spoken word to lyrics.”

“There is a strong narrative thread — almost as if you walked from Georgia through the Carolinas toward Virginia from a rural setting to a more urban area into Durham. How does the music change as you’re walking into the tobacco fields and then into the tobacco warehouse and factories?”

To get at that thread, Clayton and McElroen took six research trips to Durham, the hub of the Carolina tobacco industry in the 1920s and 1930s, where they filmed and listened to music and reminiscences from such octogenarian musicians as John Dee Holeman, Algia Mae Hinton and Drink Small.

“Any time you can sit with somebody, whether it’s Drink or Algia, people who are in their 80s and hear just a sliver of what their journey has been, those are good days,” McElroen said. “You watch the transformation of Drink, who just lost his eyesight. Then you put a guitar in his hand and he becomes a 25-year-old again.”

They also drew on images of the elders from folklorist and photographer Tim Duffy of the Music Maker Relief Foundation, a nonprofit dedicated to improving the lives and performing opportunities for Southern blues musicians, and archival photos of Durham’s tobacco industry and black community. Both video and still photos will serve as an illustrative backdrop to the music.

“It’s not the way that the Delta blues feels like raw pain in a way,” Clayton said, explaining what drew him to the region’s music. “To me, it sounds like Southern humility . . . I don’t want to say that it’s a restrained expression but it is more polite and cordial — almost the way the people from that region communicate with each other. Blues singer Elizabeth Cotton talks about the lessons her mother imparted: ‘Do what you’re supposed to do and don’t overdo.’ ”

Clayton hopes that the work will foster not only an understanding of the blues’ historical context but also reveal its cathartic and healing power.

“It pays tribute to the blues by showing where it comes from — finding the pain specifically,” he said. “By making it broad, we also touch on the universal and relatable element of the blues, that suffering is a shared experience. Our need to express pain is something we all share.”

“With the Piedmont style, it is more than just sorrow, it is honesty about life, even joyful expression.”

BB King’s Band on the Road again! Rising Stars Battle in Memphis plus Blues Foundation Announces 16 to Honor with KBA