Celebration of Oklahoma’s Blues Tradition May 27th in Rentiesville 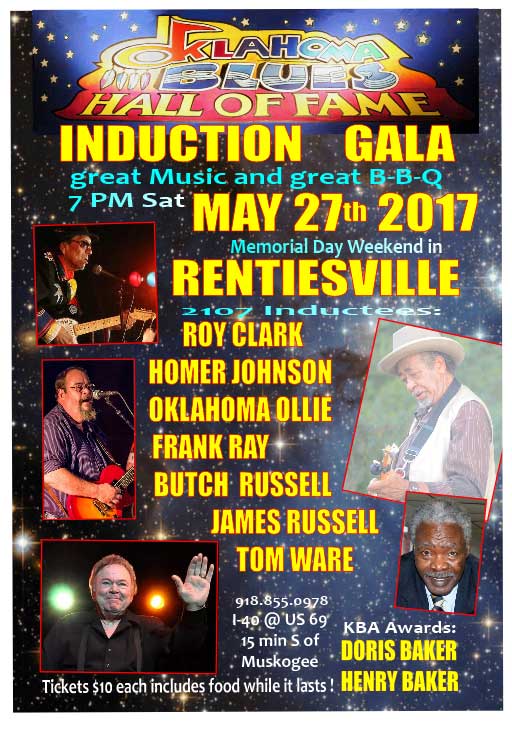 (Rentiesville, OK) – May 27th will be a celebration in Rentiesville, Oklahoma of this state’s blues tradition, and indeed it is a rich one. Seven artists with strong roots in the OK state will be honored with music, trophies, Bar-B-Que and a good time at Oklahoma blues legend D.C. Minner’s time-worn juke joint as their faces are added to the 100 already on the walls of the club’s Oklahoma Blues Hall of Fame!

The inductees this year include Roy Clark, Homer Johnson, Oklahoma Ollie, Frank Ray, Butch Russell, James Russell, and Tom Ware: – Roy Clark is a picker and humorist extraordinaire who started on TV’s Hee Haw and has a surprising history of playing blues! This star of great magnitude did a CD with Gatemouth Brown and more.

– Homer Johnson of Tulsa keeps the blues alive in Rentiesville, regularly helping with the 8-year-old Sunday Jam Sessions there. He has played the Tulsa area and beyond for years. Homer has had several bands and currently can be regularly seen at the OJHOF with Leon Rollerson Band.
– Oklahoma Ollie transplanted to the West coast for many years. OKO hits the festivals in LA – and Rentiesville! He has played bass with a great list of stars and switched to guitar to run is own band and never looked back!

– Frank Ray of the Tulsa area is a staple in the Wanda Watson Band, has worked with Selby Minner for a couple of years…really grew up in Flash Terry’s Band and has his own group as well.

– Henry Lee (Butch) Russell OKC He played behind many artists like Bobby Bland and Al Green and many of the Black bands in the OK area.
– James Russell OKC James, the brother of Henry Lee, is a true blues man who played and toured out of Oklahoma City and Wichita for many years.

Both Butch and James come from a family full of music out of the CKC area.

Come at 7pm to eat. Cecil Gray and band will be in the house early – at 7pm- and BBQ dinner while it lasts starting at 7:30. Always one of the best nights of our year! Fingers crossed that Roy Clark will be here – that would be early as well, at 8pm. It will be a great show.

Thank you for your support!