Chase Walker Band :: NOT QUITE LEGAL 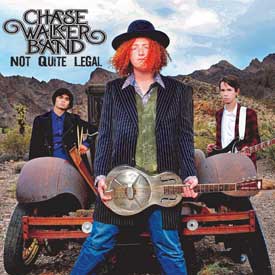 Not Quite Legal is the Chase Walker Band’s sophomore album featuring eleven originals (one hidden) by the band and two covers, one of which is the classic “Red House” by Jimi Hendrix originally recorded in 1966. The album’s strong lyrical storytelling is reminiscent of folk songs from the 60’s with guitar driven blues rock reminiscent of Led Zeppelin or The Black Crowes.

This is a story about what a kid and a guitar can accomplish in a few short years. Born in August, 1998, Chase Walker started playing guitar in 2010. By the summer of 2011, Chase had won a custom Fender Stratocaster and received a scholarship to attend Blues Kids of America Chicago where Jay Shefsky of WTTW Chicago Tonight said of his performance “this 12 year old from California already sounds right at home on stage at Buddy Guy’s Legends.“

In 2013, Chase was honored as one of only seven young guitarists selected from hundreds of applicants nationwide to attend the GRAMMY Foundation’s prestigious camp for young musicians held at the acclaimed USC Thorton School of Music.

At the age of 15, Chase was a Semi-Finalist in the 2014 Lee Ritenour Six String Theory international guitar competition, making him eligible for full scholarship to the prestigious Berklee School of Music. Fans who’ve seen him perform live often compare him to greats like Gary Moore and Johnny Hiland saying that he is: “Not just fast like some hotshot kids, but subtle, sophisticated & soulful. Excellent singer too!” Jim Kruger, Ticketmaster.

Chase began performing as the Chase Walker Band (CWB) in March 2012 but the band was not complete until he connected with teens Matt Fyke (Drums/Voc) and Randon Davitt (Bass/Voc) to form the current powerhouse trio in October 2012. To date, CWB has over 150 performances to their credit including dates on the Vans Warped Tour, the 2013 and 2014 International Blues Challenge Showcase, House of Blues, The Mint in L.A., Colorado River Festival, Gator by the Bay Festival, and many more. He has opened for greats such as Kenny Loggins, B.B. King, Eric Sardinas, Tab Benoit, Devon Allman and Cyril Neville of Royal Southern Brotherhood, and American Idol star Casey Abrams.

Chase was humbled and honored recently, when acclaimed rock photographer Robert M. Knight invited him to join “The Brotherhood of the Guitar” (BOTG). The BOTG is a project launched by Knight and sponsored by Ernie Ball and Guitar Center. The BOTG’s purpose is to shine a spotlight on a select group of unsigned up-and-coming young guitar players from around the world. Knight recently filmed an interview with Chase and photographed him in Las Vegas. Chase considers it a huge honor to meet Mr. Knight and to be included among so many great young players in the BOTG. The No Quite Legal album cover is by Knight.

Chase was featured as one of “The top ten musicians under 18 you need to know” in the April 2015 issue of American Blues Scene Magazine.