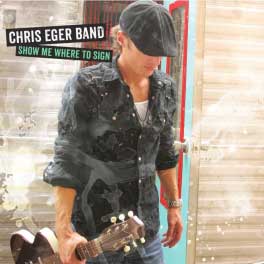 On his new album, Show Me Where To Sign, Chris Eger builds on the blues rock foundation for the future. Eger flexes his songwriting muscle and digs deep as he taps into a wide range of grooves that span classic soul, funk, Southern rock and roots/Americana-genre blending, as opposed to genre-hopping – all seamlessly pulled together with ultimate ease. “When it comes to writing a song,” he explains, “I’m pulling from Montgomery Gentry as much as I’m pulling from Chris Connell and John Hiatt. I love being a stylistic melting pot.”

For the record, the singer/songwriter/guitarists hunkered down in Nashville with longtime friend and influential singer/songwriter/guitarist Eric Heatherly who also handled the production duties. The album not only features songs written by Eger and Heatherly, but blues heavyweights Stacy Mitchhart and Gary Vincent contribute tunes as well. “This record!” Eger enthuses, “To say dreams come true is a huge understatement. Not only did I have the opportunity to work with one my musical heroes Eric Heatherly as my producer, but we were able to bring in Reese Wynans from Double Trouble to play keyboard and Bekka Bramlett for backing vocals.”

In addition to Rock & Roll HOF inductees Wynans and the impeccable Bramlett, some of the most prolific studio players in Nashville lend their talents to the album’s 11 tracks. Show Me Where To Sign isn’t just the place where Hendrix-inspired classic rock meets horn-heavy funk and delta soul, it’s the launching pad for a fresh take on vintage, guitar, and roots music for the 21st century.