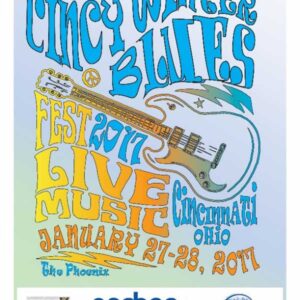 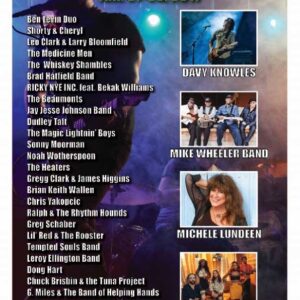 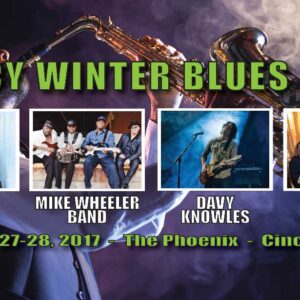 (Cincinnati, OH) – The Cincy Winter Blues Fest, an annual event held each January will take place January 27-28 at The Phoenix, a beautiful building on the historic registrar in downtown Cincinnati. 30 acts will perform over 2 nights on 4 Stages creating “The Hottest Event of the Winter.” Headliners for the 2017 Cincy Winter Blues Fest are The Mike Wheeler Band (Chicago, IL), Davy Knowles, Michele Lundeen (San Diego, CA) and Southern Avenue (Memphis, TN).

Mike Wheeler has a vast knowledge of music and a voice that’s reminiscent of the late Sam Cooke. He can sing and play everything so well that you may forget what the original record even sounds like. From Jazz to Rock, from popular music to Top 40, he slides in and out of musical genres with sophistication, ease and indulgence. Mike Wheeler is a brilliant staple in the Chicago blues community, playing and writing songs for a variety of Chicago artists. He has travelled the world as an ambassador for Chicago blues music.

Davy Knowles grew up in the Isle of Man, learning to play guitar from listening to the likes of Gallagher, Clapton, Knopfler, Green and Mayall in his father’s record collection, and honing his skills playing the local music circuit. Knowles’s professional career started with a bang – arriving in America age 19 with his band Back Door Slam, an acclaimed debut album, and rave reviews at SXSW 2007. From that dynamic introduction, Knowles proceeded to make a significant impact across US media – from memorable TV performances on Jimmy Kimmel and Good Morning America, to a three-year run at radio with the singles ‘Come Home’ from the debut album Roll Away and ‘Tear Down the Walls’ and ‘Coming Up For Air’ from the Peter Frampton produced sophomore album – both albums Top 3 Billboard Blues Chart.

Michele Lundeen, dubbed the “Queen Of Steam” for her stirring vocals and electrifying stage presence, does indeed command attention. Michele is a powerful, soulful vocalist and she and her band effortlessly blend classic roadhouse blues, rock, rhythm & blues, jump swing, Memphis groove and funky soul into a satisfying musical stew. An established, popular and respected veteran of the club, concert and festival circuit in both Northern Nevada and Southern California and beyond, Michele has shared stages with dozens of nationally known blues and roots artists from John Lee Hooker to Elvin Bishop and Savoy Brown to Jimmy Thackery while gaining a reputation as a talented headliner in her own right. Audience participation encouraged.

We will have 27 outstanding local and regional artist also performing at the winter blues fest. For details on each, go to: local artists.

The Cincy Blues Society (CBS) is a member-supported, 501(c)3 not-for-profit all volunteer organization whose purpose is to promote and advance the culture and tradition of Blues music as an original American art form. Formed in 1990, CBS strives to fulfill its mission by encouraging and facilitating both performance and educational events and projects, such as: the annual Cincy Blues Fest each summer and the Cincy Winter Blues Fest, both which attracts outstanding national and local talent; the Cincy Blues Challenge to select a regional band and solo/duo act to compete in the annual International Blues Competition in Memphis; and, our Blues in the Schools program, servicing the youth in the Greater Cincinnati area “Keeping the Blues Alive!”