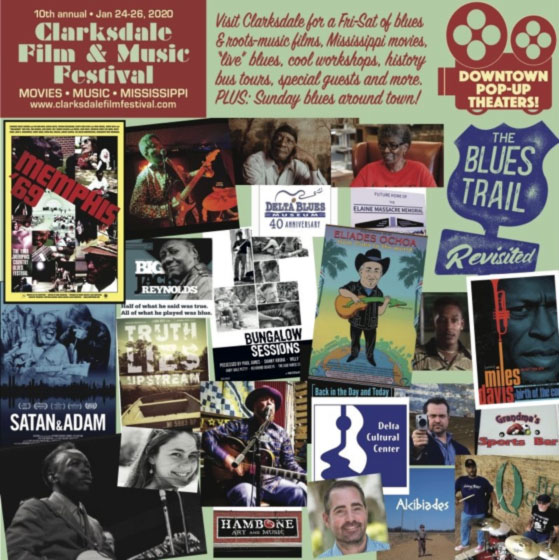 The 10th Annual Clarksdale Film & Music Festival returns Friday-Sunday, January 24-26, to celebrate its first decade in the historic downtown — an arts and entertainment district in the midst of revitalization due, in large part, to nightly blues music and annual festivals like this one.

“This is the tenth edition of our film festival, and it promises to be our biggest and brightest yet,” said event co-founder Roger Stolle. “Even more exciting than this single event is all of the progress we’ve seen in the areas of blues tourism and downtown revitalization during our festival’s first ten years. We like to think that our film festival and April’s Juke Joint Festival had something to do with some of our progress here.”

This year’s pop-up movie theaters are two popular downtown hangouts: Grandma’s Sports Bar and Hambone Gallery. The panel discussions and workshops will be held nearby at the Delta Blues Museum and other venues.

“We have definitely expanded our film festival offerings this year. We increased our ‘workshoppy’ stuff threefold and added a day of free music shows on Sunday,” Stolle explained. “We’re always looking for ways to positively impact more Clarksdale businesses as well as present world-class entertainment and educational activities for our visitors and locals alike. As always, plenty of the filmmakers will be on hand as well.”

Even with all of the other events and activities, the heart of the Clarksdale Film & Music Festival is still its amazing array of films somehow connected to “here.” Sample highlights include:

– Satan & Adam – The acclaimed tale of an unlikely blues team forged on the streets.

– Walk with Me – The story of Clarksdale transplant, bluesman Lucious Spiller.

– Miles Davis: Birth of Cool – The life and music of the blues-inflected jazzman.

And many, many other features, shorts and music videos — subjects include blues, civil rights and more.

So, what does the Clarksdale Film & Music Festival cost attendees?

“We have some amazing sponsors and volunteers, so we keep things affordable,” said co-organizer Nan Hughes. “A ticket is just $5 per day on Friday and Saturday, and it gets you in to both pop-up theaters as well as a ride on the History Bus Tour. It also includes our 5pm daily receptions with ‘live’ blues music and hors d’oeuvres. Then, our fabulous workshops, panel discussions and official Sunday music is all free!”

The schedule and event descriptions can be found at Clarksdale Film Festival website. Questions? Call 662-624-5992 during regular business hours. For lodging options, go to www.visitclarksdale.com.