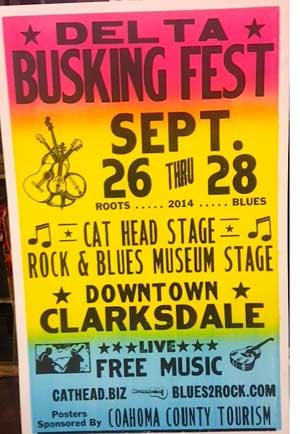 (Clarksdale, MS) – This weekend, the Delta Busking Festival returns for its second year in blues-historic Clarksdale, Mississippi. It is part of the tri-state area’s Bridging The Blues roster of events.

“As far as we know, this is the only blues festival created in tribute to the Delta’s street musician tradition,” said festival co-organizer Roger Stolle, also owner of Cat Head Delta Blues & Folk Art. “From Robert Johnson to Foster ‘Mr. Tater’ Wiley, the blues has always been built on the tips and exposure that street performances offer hard-working musicians.”

This year’s Delta Busking Festival runs Friday-Sunday, September 26-28. It is a daytime event on two stages (plus pop-up performances around town) in front of downtown Clarksdale’s iconic Cat Head blues store and world-famous Rock & Blues Museum. And, as co-organizer Theo Dasbach loves to point out, the music doesn’t stop at 5pm.

“In Clarksdale, we are very fortunate to enjoy live blues music 7 nights a week, every week,” said Dasbach, also the founder of the Rock & Blues Museum. “After you enjoy our festival stages during the day, you can go out for music at Red’s Lounge, Ground Zero Blues Club and other hot spots at night.”

The festival is a free event. The event poster was sponsored by Clarksdale-Coahoma County Tourism. Attendees are encouraged to tip the festival musicians as well as buy CDs from the artists.