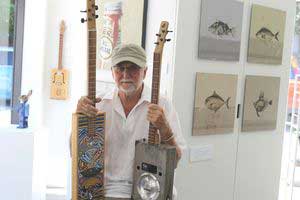 GREYTOWN, NZ – Art and depression era blues music have combined in Greytown — with an exhibition of artisan guitars gracing the walls of the town’s newest art space.

Musician and former producer Alan Galbraith is exhibiting a range of his cigarbox guitars at The Hub, an art gallery and photographic studio on High St, launched in December in Greytown, New Zealand.

Cigar box guitars had their origins in the American South during the Great Depression, with cash-strapped musicians cobbling together instruments from an empty cigar box, a broomstick and a few strings.

“Musicians made all sorts with stuff lying around the house — banjos, violins, tea-chest double bases, they played jugs and washboards and have a sing along,” Galbraith said. “This is the same principle, but it’s become a bit of an art form.

“I think having them on show in Greytown will work well, as the main street is become more diverse — and this is something different from frock shops and cafes. “I love how Greytown has grown and I want to be part of that.”

Galbraith said he developed an obsession with guitars as a youngster growing up in Nelson, and amassed a large collection. He played guitar in several bands, and later worked as a producer with New Zealand acts such as Sharon O’Neill, Herbs, Dragon and Fred Dagg.

He tried his hand at guitar making in 2011, having seen cigarbox guitars at a market in Noosa.

“I thought, ‘I could make those’. “It came quite easily — my Dad did a lot of woodwork and fixed everything himself, so I must have learned by osmosis.”

As genuine cigar boxes are expensive, Galbraith makes his all own box bodies, usually from plywood, rimu and balsa wood.

Though they are straightforward to make, tuning the guitars, ensuring the frets and tuning machines are placed correctly, is “a bit of a process”.

“I’m a musical purist — it’s more about what they sound like, rather than what they look like.

“They have a distinctive boxy sound, which lends itself well to blues.”

Galbraith plans to gather a group of musicians to play his creations and other instruments outside at The Hub, and at other Greytown events.