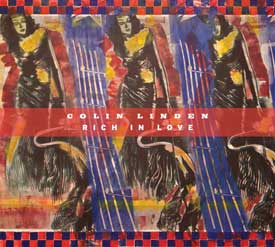 Acclaimed eight-time Juno Award-winning singer/guitarist Colin Linden CD, Rich in Love on Stony Plain, marks a return to the same label that released Colin’s first studio album, The Immortals, in 1986, and also represents his first new studio recording since From the Water in 2009. Colin Linden’s last album was a live recording released in 2011.

An Ontario, Canada native and long-time Nashville resident, Linden and the two members of his band have been playing together for over 25 years, and it shows on Rich in Love, which sparkles with their seamless musicianship and collective talents. Colin Linden’s singing is fresh, emotional and engaging. The songs transport the listener through lustful encounters, remorse-laden retrospectives and forlorn longing, while the music takes influences from blues, country rock and roots. And then there is the playing, where every guitar pluck, bass note, subtle drum sweep or organ solo from this consummate musician and his band adds to the stories. It is a truly captivating package, a polished roots diamond, a treasure to reflect on and restore the soul.

The 12 all-original songs on Rich in Love were written by Linden, solo or in tandem with other writers such as his wife, Janice Powers (a published novelist), band member John Dymond and Grammy winners Gary Nicholson and Tom Hambridge.

About the songwriting process for the new CD, Linden says, “I felt like so much has changed since my last studio album in 2009. It was as if I was writing from a different place for these songs. At some point I even began to suffer from insomnia, and several of the songs were composed literally in the middle of the night, such as “Date with the Stars.” While the music on my new album covers a lot of influences, I still think of myself as a blues player, whatever I’m doing.”

According to Linden, “Delia Come for Me,” had a particularly interesting genesis: “It was partially inspired by the 2011 execution in Georgia of Troy Davis for murder, whose subsequent investigation raised serious questions about his guilt; a case which reminded me of the old traditional country blues ballad, ‘Delia.’”

Colin Linden is a genuine renaissance man of roots music. He’s a singer and songwriter of great skill, an in-demand and prolific record producer and sideman to the stars as a guitarist. Rich in Love comes at a time when Colin Linden is a very much in-demand musician, having played on Gregg Allman’s Grammy-nominated Low Country Blues, as well as on Grammy-winner Rhiannon Giddens’ most-recent album, Tomorrow Is My Turn, and Diana Krall’s 2012 CD, Glad Rag Doll. In 2013, Linden was tabbed by Bob Dylan to play guitar in the music icon’s band for his summer tour. He was the featured guitar player on the PBS-TV special saluting gospel music, “In Performance at the White House,” backing such luminaries as Emmylou Harris and Rodney Crowell, Lyle Lovett, Shirley Caesar and the aforementioned Rhiannon Giddens. In recent years, he’s also played on the soundtracks for a number of feature films, including Inside Llewyn Davis, The Hunger Games, R.I.P.D. and the acclaimed documentary, A Place at the Table. In August 2015, he was music director for the special tribute to legendary Sun Records founder Sam Phillips at the Country Music Hall of Fame.

The catalyst for all of these performances has been the celebrated producer extraordinaire T Bone Burnett, who has created some of the most lauded music performed on record, television and film over the last 15 years