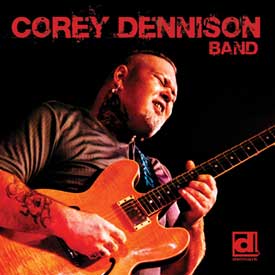 There’s a manic joy in Corey’s playing. He laughs in recognition of an exceptional riff, and shakes his head from side to side to acknowledge he’s hit the groove he’s looking for. Corey is constantly in motion and attuned to the music and the band members. He’s worked hard to bring this all together. Here is the result on Delmark. Really good music — honest, fearless, and without restraint. Ain’t no “cain’t” in Corey. Let’s DO this thing! 13 new, original songs include “Getcha’ Pull!,””Tugboat Blues” and “Room To Breathe.”

“I’ve never seen anybody play the blues with more feeling and with more passion than Corey Dennison,” says Tom Marker, Producer and Host of Blues Breakers on WXRT and Blues Time on WDCB.

Born in Chattanooga, Tennessee, Corey Dennison spent a majority of his childhood moving about Tennessee and Georgia. As a young boy, Corey heard the powerful, soulful sounds of the Blues on late night radio programs and recalls being captivated by the music. He received his first guitar at the age of 6 and began to imitate the music of artists such as Gatemouth Brown, Albert Collins and Albert King. Corey immediately felt a strong connection to Soul music. “I just loved the way Soul music made me feel from my head to my toes. I remember humming along to songs from Wilson Pickett, Curtis Mayfield & Sam Cooke.” This marked a lasting impression on his musical style and is clearly visible today in his soulful vocals and fiery guitar solos.

Corey found his musical calling while hanging out with his harp playing uncle. “My Uncle snuck me into clubs where I saw some of the greatest Blues cats of all-time, Albert King, Albert Collins and Junior Wells. This is where it became clear to me; I wanted to be a Blues Man.”  He spent 12 years honing his skills as a sideman for Carl Weathersby, a mentor beyond the music: “Pop has really showed me the real me and have helped me in a lot of ways; Showed me what to do what not to do. I wouldn’t know anything if it was not for Carl and my brothers-in-arms.”

The Corey Dennison Blues Band debuted in Chicago in early 2013, storming the stages of Buddy Guy’s Legends, Rosa’s, and Leroy’s Hot Stuff. In late 2013, Corey’s always entertaining stage presence prompted the release of Live in Chicago, a thrilling document of a typical night in a Windy City blues club. The album left little doubt that the blues had found its premier young lion in Corey Dennison. After spending much of 2015 storming both sides of the Atlantic with harmonica master Sugar Blue, Corey is back in Chicago and The Corey Dennison Band is now part of the legendary Delmark Records family…. The self-titled Corey Dennison Band, just released.