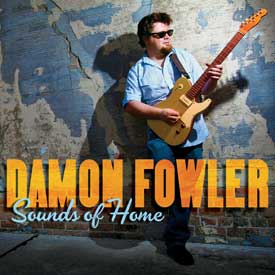 After spending much of the past year touring with the band Southern Hospitality, Damon Fowler is back with his third solo project for Blind Pig Records, Sounds of Home. Damon chose swamp blues master Tab Benoit to produce and record him at Tab’s rural Louisiana home studio, and their collaboration has resulted in Damon’s strongest effort to date. The tension between his measured, laid-back vocal delivery and the hallmark intensity of his guitar virtuosity has never been keener, and the stories told in his songwriting here – sometimes in collaboration with long-time writing partner Ed Wright and Benoit – exhibit a combination of depth, grace and humor very few of his contemporaries can match.

Damon sets the standard for what is to come on the first track, “Thought I Had It All.” It’s an introspective, brooding tale shot through with razor sharp, frenetic guitar leads. Other songs like the title cut and “Where I Belong” flow in an easy Southern groove. Damon offers up two covers, peppering Johnny Winter’s “TV Mama” with slithering slide guitar runs, and doing a great version of Elvis Costello’s “Alison.” The country tinged “Old Fools, Bar Stools, And Me” offers a poignant take on a familiar theme. “Do It for The Love” is a sweetly contemplative ballad featuring the lyrical counterpoint of Damon’s lead guitar and Tab’s pedal steel. The album closes with an inspired, finger-picked rendition of the traditional gospel song, “I Shall Not Be Moved.” As with Damon’s legendary live performances, Sounds of Home takes the listener on a tour through the rich traditions of American roots music, presented by one of its foremost practitioners.

“A blend of sacred steel, backwater blues and howling, greasy swamp rock, Fowler’s music is a primal, atavistic sound that makes the hair on the back of your neck stand up. His solo gigs with his skin tight power trio have converted rooms full of strangers into a loyal congregation who now attend his services regularly, and his exposure with the blues supergroup Southern Hospitality has given him evangelical status among the faithful. Fowler is that rare artist whose studio recordings pack as much of a wallop as his live shows. This one will pin your ears back and track swamp fonk all over the place.” – No Depression

” On Sounds of Home, he showcases his tasty lead work and subtle, soulful singing.” – Relix

“Where the swamp meets the cotton field; there lies the music of Damon Fowler. Sounds of Home signifies Damon Fowler’s progression into the ranks of the Americana elite.” -Living Blues