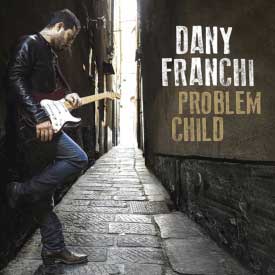 Dany Franchi was born in 1990 in Genoa, Italy, and is widely considered one of the best young blues musicians on the scene today. His soulful vocal tone and incredibly tasteful guitar playing leave any audience wanting more.

In 2014 he recorded I Believe in Ohio with International Blues Challenge winner Sean Carney. Texas blues legend Anson Funderburgh and Don Ritter of Category 5 Amps produced Problem Child. The CD was recorded at the world-famous Wire Recording Studio in Austin, Texas with Grammy award-winning engineer Stuart Sullivan. The album exudes soulfulness and authenticity, and while the respect for tradition is evident, the album also has strong original content, world-class musicianship and a refreshingly unique sound that’s bound to make any connoisseur of blues and roots music take notice.

“It was a real pleasure working with Dany,” says Anson Funderburgh. “He’s a passionate singer with a great voice; his approach to songwriting is solid and well-thought-out. He plays guitar with an authentic, old-school style while lending his own unique intensity to the sound and breathes a new life into the music while staying true its origins. Dany is one of the new guys who will keep the rootsy blues and soul sound alive and moving forward. I was honored to be part of this project.”

Franchi has performed at prestigious blues festivals all over the world such as Blues From The Top in Colorado (USA), the Dallas International Guitar Festival in Texas (USA), Doheny Blues Festival (USA), Blues’n Jazz Rallye in Rapperswill (CH), Olsztyn Blues Festival (PL), Augustibluus Festival (ES) and many others.