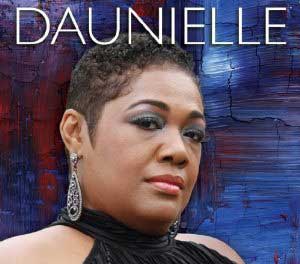 Daunielle was produced by multi-Grammy-winner Jim Gaines and recorded at Sonic Ranch Studios in Tornillo, Texas. This self-titled release is the Catfood Records debut of Memphis-based soul/blues singer Daunielle (pronounced “Dawn-Yell). Hill is backed on the album by the Catfood Records “house band,” The Rays, along with special guests Reba Russell and Tameka “BigBaby” Goodman on backing vocals.

Going into the studio for the first time as a solo artist, Daunielle was understandably a little nervous with anticipation, but quickly relaxed. “The sessions were amazing,” she exclaims. “The musicians and everyone in the studio were awesome and made me feel completely comfortable. It was a great experience for me and it couldn’t have turned out any better.”

Memphis born and raised, Daunielle comes from her musical pedigree quite naturally: her father, William Brown, was an original member of The Mad Lads, a vocal group that recorded for the Stax/Volt label; and he also did some engineering work at the famed Stax recording studios.

Primarily known as a background singer, Daunielle represents a coming out party for an artist whose vocals have been heard on albums from Solomon Burke (Nothing’s Impossible – 2010) and Huey Lewis & the News (Soulsville-2010), as well as recent CDs from Cee Cee James and labelmates Sandy Carroll and Jackie Johnson. Daunielle has also toured for the last four years with Huey Lewis & the News.

The 10 tracks on the new CD feature original songs from Daunielle, Sandy Carroll, Bob Trenchard and  Catfood Records artist, James Armstrong, plus stellar takes on “Damn Your Eyes,” (popularized by Etta James); and the legendary Jackie Wilson classic, “(Your Love Has Lifted Me) Higher and Higher.”

“A lot of the songs on my album are a reflection on my life, even the ones I didn’t write,” she observes. Of the two covers, she notes: “Etta James (along with Sarah Vaughn and Nina Simone) was a huge influence on me & I loved the way she did “’Damn Your Eyes’ so much I wanted to get this version out before she passed, but unfortunately that was not to be. On ‘Higher and Higher,’ I combined both Rita Coolidge’s slower tempo version on the intro and Jackie Wilson’s kickin’ original sound for the rest of that song. My scratch vocals on the track turned out so good that we used them as is.”

One of her original songs, “I Got a Voice,” also has a special meaning for Daunielle.“I’ve got two adopted children – my daughter Starr and son Spencer – who were born medically-challenged,” she says, “and that song is about Starr’s struggle to have her voice heard. They’ve both come along so much since then and I’m so proud of how they’ve developed.”

In addition to her ongoing tour work with Huey Lewis and the News, Daunielle will perform shows with her band around Memphis and the south.