Dave Fields :: ALL IN 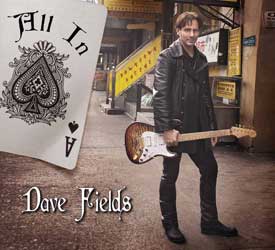 Dave Fields new RMR Top 50 Blues Rock Charts hit CD All In will electrify you with its rockin’ blues soul. Never before has the fire and intensity of Dave’s guitar been captured in a recording like it has on this new CD! All In features 11 songs produced by Dave: 9 originals an, a funky ‘live’ version of Led Zep’s “Black Dog” and a burning rendition of the timeless classic “Crossroad.”

ALL IN was recorded mostly live in the studio. It features many of the same musicians on Dave’s first three CD’s Time’s A Wastin’, All Wound Up and Detonation: Andy Huenerberg (bass), Kenny Soule (drums), Vladimir Barsky (keys), Dave Moore (drums) and some new comers: Tony Tino (bass) and special guest BMA nominee Dave Keyes (piano).

There are many different flavors of Dave featured on this CD. The rockin’-fatalistic “Changes In My Life” starts off the CD with a scintillating guitar solo that zooms off into the clouds. Dave blazes away on the spooky-rock “Voodoo Eyes” which will take you to a place where classic rock legends dwell. “Let’s Go Downtown” will get you “boogie-in” your seat while the surreal-lamenting “Dragon Fly” drifts through layers of realities. All In winds down a road that will take you to your limit and then drop you in a place that will make you say, “Oh Yeah!”

Dave grew up in New York City the son of a noted gifted composer arranger producer Sammy “Forever” Fields. From the time Dave was a young child he grew up in his father’s recording studio being exposed to the likes of Sammy Kahn, Rupert Holmes and Stevie Wonder. Being raised by nanny who was from Waycross Georgia, an eclectic dash of southern culture was mixed into Dave’s persona.

Dave has performed worldwide with shows in Norway, Italy, Moscow, all over The Northeast US and The Legendary Blues Cruise. His awards include Big City Blues Magazines “All You Need Is Love” Happy To Have The Blues Lifetime Achievement award and the 2006 IBC Best Self Produced CD (Roxy Perry Back In Bluesville). On May 20th 2012 he was inducted into NY Blues Hall Of Fame along with John Hammond and Gary US Bonds. Lastly you can hear Dave’s song “Train To My Heart” on legendary bluesman John Mayall’s most recent CD Tough.

“When I first heard him I knew he had something special. When Dave plays he plays with such passion.”

exhilarating concert experience if you ever get a chance to see Fields live.”

Mr. Sipp :: THE MISSISSIPPI BLUES CHILD The 13th Annual Print Magazine is on the streets!