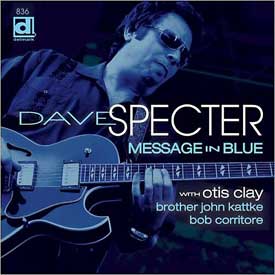 “Dave Specter’s 10th album, Message in Blue, is a soulful and compelling blend of Specter’s original instrumentals along with powerful blues/R&B vocals. Soul legend Otis Clay makes his Delmark debut as special guest on three songs including a re-make of the classic “Got To Find A Way” with Willie Henderson and the Chicago Horns, The Falcons’ “I Found A Love” (complete with Specter nod to Robert Ward playing through a Magnatone amplifier) and a tribute to the late Bobby “Blue” Bland, “This Time I’m Gone For Good”. Brother John Kattke is on keyboards and vocals while harp ace Bob Corritore guests on two Specter originals. From tough and tone-full Chicago blues guitar to soul-jazz grooves and funky R&B, Message in Blue is sure to satisfy! “One of the few top-tier guitarists.” (Down Beat)

“Dave Specter and Chicago blues go hand in hand, but while Specter has been a fixture on the Chicago blues scene since the 1980s, he’s been increasingly branching out into other forms and genres with his elegant, graceful, sparkling-clear guitar playing, touching down here, on his tenth album, on soul-jazz, Latin rhythms, New Orleans street corner horn stomps, and good old gut-bucket soul. Oh, there’s the blues here, too, but Specter has moved beyond that, really, and is exploring so much more on his albums, all without losing that blues base, or that wonderful, warm tone that is his signature as a guitar player…” (Steve Leggett/AllMusic)