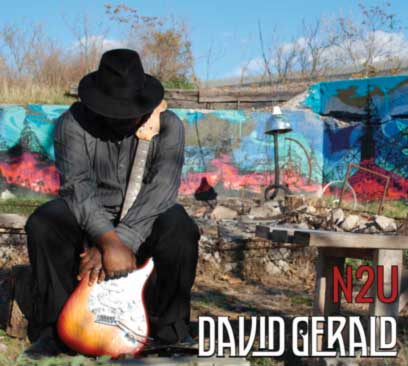 Gerald’s dynamic, blues-infused rock and soul hybrid has been captivating audiences across the country for over a decade. Gerald’s stirring live performances have brought widespread acclaim in the Blues and Rock communities.

Music video premiers of two of the album’s ten tracks of blues-infused rock ‘n soul created a groundswell of excitement in anticipation of the release.

Gerald grew up to the sounds of the blues, R&B and rock in his hometown of Detroit. He started playing guitar at 14, influenced by Prince, Michael Jackson and ’80s rock guitarists; as he began to explore the music of blues guitar heavyweights like Albert King, ZZ Hill, B.B. King, and Stevie Ray Vaughan, his sound evolved and expanded to where it is today. His 2009 debut CD, Hell And Back, continues to receive consistent airplay.

“This album has been a long time coming,” Gerald comments. “I put together these songs for myself, my friends and supporters. It’s all about new thoughts, new experiences and deeply felt emotions. I hope everyone who listens can find something that touches them. Something they can relate to.”

N2U is a true solo effort; with the exception of two live tracks where he’s backed by his band, Gerald not only plays every instrument on the album’s eight studio tracks, he also handled all of the recording and mixing duties.