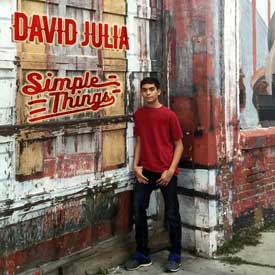 Guitarist, singer and songwriter David Julia has been performing live since the age of seven and by the age of ten he had a regular Friday night gig at a local club. Simple Things is his first recording and take it from me, there is nothing simple about it.  On this five track EP, David wrote four of the songs and he surrounded himself with some of the best players in the business.  Joining David Julia, on guitar and vocals, are: the disc’s producer, Mark Telesca (Mark Telesca Band, Blues Dragon & Diunna Greenleaf) on bass; Chris Peet (JP Soars & Southern Hospitality) on drums; and Albert Poliak on Hammond B3 organ.

The disc opens with one of David’s originals titled “Just A Matter Of Time.” It’s a hot number about a hot number who caught David’s eye. After laying some lines on her he’s so sure he’ll win her over that he flat out tells her, “it’s just a matter of time till I make you mine.” From a totally different standpoint, once you listen to this well written, well sung track, David will have won you over as well. As you might expect with this ensemble, the rhythm is spot on and David’s guitar playing is nothing short of masterful.

“Simple Things” is another excellent, original track. On this one, along with David showcasing his smoking blues guitar licks, he also demonstrates an impressive vocal range leading me to believe he’d sound great singing any style of song in any genre of music. As will be the case with all of these tracks, the rhythm –  this time led by Albert’s organ wizardry – is just monster.

“You Don’t Need No Shelter” just solidified one of my above statements. With a smooth jazz vibe going on musically, David’s silky vocals kind of reminded of how cool Michael Franks sounded on “Popsicle Toes.” This magnitude of versatility at this young of an age is quite astounding.

“I Need To Find My Baby” is a swinging shuffle, and with the whole band on top of their game, it may musically be the disc’s best track. Although David’s just fifteen, one might think as tight as the group sounds that they’ve been playing together at least that long.

The only cover on the disc is a B.B. King song titled “You Done Lost Your Good Thing Now.” It starts out soft and slow and then midway through it, David unleashes a staggering and relentless two minute attack on his axe which turns the song into an all out smoker. This is the kind of stuff I remember hearing from another 15 year old about twenty years back, and that young man was Kenny Wayne Shepherd.