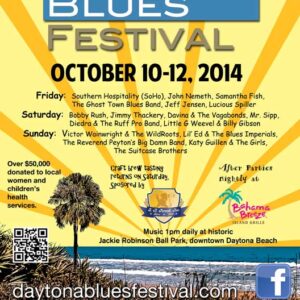 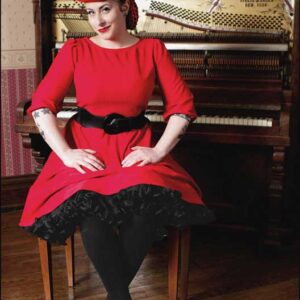 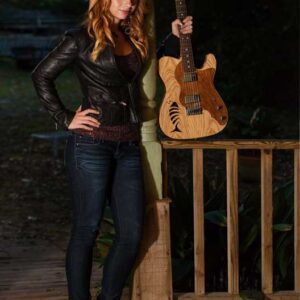 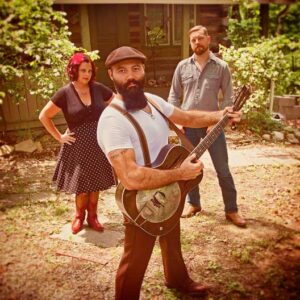 The Fifth Annual Daytona Blues Festival, daytonabluesfestival.com, returns to historic Jackie Robinson Ball Park, Downtown Daytona Beach, on October 10, 11 and 12, 2014. This year’s exciting line up combines the best rising blues stars with the greatest established talent. With music starting at 1:00 pm daily and running until 10:00 pm Friday and Saturday, 8:30 pm Sunday, this is a weekend so packed full of world class blues it can’t be missed.

Friday starts with IBC solo runner-up Lucious Spiller, with his blazing guitar work, his room-filling vocals, his self-defined blues style, and his boundless energy. Next up is Jeff Jensen with his touring band, playing a great balance of blues, R & B , and swing.  Following Jeff is the Ghost Town Blues Band, a six piece up-and-coming unit out of Memphis, featuring horns and a cigar box guitar, and fresh off a second place finish at the IBCs.  As the sun begins to lower, we have Samantha Fish, one of the greatest young talents of this or any era.  The soulful voice and harmonica of John Nemeth will ring out as the sun begins to set. And the evening will conclude with the greatest blues super group around, Southern Hospitality, or SoHo, with its three brilliant leads, Damon Fowler, JP Soars and Victor Wainwright.

Saturday kicks off with the country acoustic blues of Little G Weevil and Billy Gibson. Next up is the “blues diva” DieDra and the Ruff Pro Band. We couldn’t go a day without an IBC champion, and 2014’s champ, Mr. Sipp “The Mississippi Blues Child,” follows DieDra. Then we have… wait… a blues band without a guitar? That’s right, but when you have Davina and The Vagabonds, you don’t miss it at all.

As the night begins to cool, the music heats up with Jimmy Thackery, founding member of the Nighthawks and true blues veteran of the road. We end with a legend, Bobby Rush, who at 79 was nominated for a 2014 Grammy Award for Best Blues Album, “Down in Louisiana.” Oh, and did we mention that from 2 to 6 there will be a craft brew tasting in the Ball Park?

Sunday starts with another acoustic duo — but this one’s from Spain — The Suitcase Brothers.  Following our Spanish friends is the next Kansas City phenomenon, Katy Guillen and The Girls. With their reputation for incendiary live performances, The Reverend Peyton’s Big Damn Band is up next playing the Delta Blues with hillbilly fervor. You have to be big to follow the Reverend, and musically nobody’s bigger than Chicago’s own Lil’ Ed and The Blues Imperials. Finally, we end the festival as we have every year of our existence, with Victor Wainwright and the WildRoots bringing down the house.

That might be enough, but it’s not all. Thursday night at 8:00 pm Bahama Breeze hosts our welcome party. And get used to the surroundings, because every night following the festival, Bahama Breeze will be hosting our after parties, from 10:00 pm into the wee hours.

Finally, but most important to us, we have donated over $50,000 to local women and children’s health services since our inception. We are an entirely volunteer run 501(c)(3) organization, with all proceeds going to our designated charities.  This year our charities are the Neonatal Intensive Care Unit at Halifax Health, and Project WARM at The Vince Carter Sanctuary.

So come to the Daytona Blues Festival. Buy a t-shirt and taste some craft beer. Listen to the best blues music at the nicest time of the year. Have a great time while supporting extremely worthy local health care needs. And visit our website, daytonabluesfestival.com, and follow us on Facebook, for all the details and any updates.