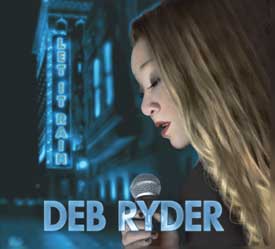 Deb Ryder is regarded as one of the best up and coming singer/songwriters in the blues world today. Her newest release, Let It Rain, was recorded at the famous Ultratone Studios with award winning engineer/mixer Johnny Lee Schell at the helm. Produced by Grammy Award winning producer Tony Braunagel, this album features the absolute A-List of renowned players in the genre such as Mike Finnigan, Kirk Fletcher, Albert Lee, Kim Wilson among others, who bring a fresh energy and a powerful sound. All eleven songs are originals by Ryder, and are a celebration of the blues from classic to modern, Chicago to New Orleans. Deb possesses a powerhouse voice and the capability of writing high quality, original songs that hold up to repeated listening.

“I was looking for a new direction while staying true to my blues roots. Getting to make an album with such legends was a most amazing, joyous and altogether perfect ride. I am very proud of this, my latest CD on Bejeb Music, and can’t wait for you to hear it.”

Born outside Chicago, Deb was influenced at an early age by the music of the city, and by her father, a Chicago club sensation. She began appearing on stage as a young teen at her step father’s famous nightclub The Topanga Corral, where she opened for such blues legends as Etta James, Big Joe Turner, Taj Mahal and Bob Hite to name a few. It was there that she honed her style as a blues performer. These experiences and the influence of the iconic blues greats are indelibly etched in her writing and vocal style.
Info: www.debryder.com