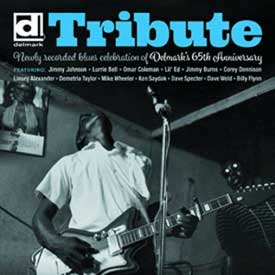 The tributes on the album are heartfelt and moving. That’s because the artists paying tribute have a special tie to those they are paying tribute to. Omar Coleman has long been a fan of Junior Wells and lists him as one of his biggest influences; Jimmy Johnson’s brother was Magic Sam’s bassist; Lil’ Ed (on loan from Alligator Records) is J.B. Hutto’s nephew; there’s a Tennessee connection between Corey Dennison and Sleepy John Estes; a Mississippi connection between Jimmy Burns and Big Joe Williams; Billy Flynn’s mentor was Jimmy Dawkins; Shirley Johnson was in the Blue Chicago milieu of the 90s where Bonnie Lee was also; Lurrie Bell pays tribute to his father, Carey; and Demetria Taylor pays tribute to Big Time Sarah who was partially responsible for Demetria being on Delmark.

Bob Koester would sometimes refer to Delmark as the house that Junior built. Wells’ Hoodoo Man Blues (1965) is still the biggest selling album on the label and is considered one of the greatest blues albums ever recorded. Delmark is also a jazz label and has more jazz albums in its catalog than blues however it’s been the blues that has ensured Delmark continued existence.

Bob Koester, 20 then but 85 years young now, started Delmark in St. Louis in 1953 recording the Windy City Six, a traditional jazz band. (Bob hates the phrase Dixieland jazz.) A transplant from Wichita, KS, Bob learned the whereabouts of forgotten blues musicians from the 1920s and 30s living in St. Louis including Speckled Red and Big Joe Williams. In the case of Big Joe it may have been Joe who tracked Bob down. Bob joked Big Joe was pretty good at sniffing out a record deal. Sure enough, after Speckled Red’s The Dirty Dozens came out as Delmar 601. Big Joe was the second blues artist to have a Delmark LP.

Soon afterwards, Bob moved to Chicago for a record label purchase that never happened, but it led to the beginning of his retail operation Jazz Record Mart and put Delmark in the city with the most blues activity. After recording Sleepy John Estes, Curtis Jones and one more Big Joe session, Hoodoo Man Blues was the first electric blues album to be recorded on Delmark. Buddy Guy was thought to be under contract to Chess so he was billed as Friendly Chap for the first 7,000 copies.

Delmark returned to the studio in the 90s but ramped it up big time in 1992 with the purchase of its own recording equipment. Since then the number of blues albums in the catalog went from 50 to 250.