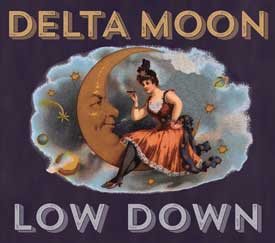 The dynamic dual slide guitarists Tom Gray and his “blues brother” Mark Johnson once again shatter perceptions of what the music is and what it can become. Their 10th album, Low Down, is another landmark for a band formed in the new millennium. Consisting of nine originals and three hip covers, it enervates the genre as a timeless, evolving cultural treasure. Gray (lead vocals, guitars, keyboards, & harmonica) and Johnson are backed by Franher Joseph (bass) and Marlon Patton (drums) and backup singers Anna Kramer and Francine Reed.

The ominous “Wrong Side of Town” opens with a funky N’Awlins groove and Gray’s whiskey-cured voice. The dark, minor key “Afterglow” mines similar voodoo rhythms as Gray’s lyrics jab passionately with Johnson’s melancholy lead guitar speaking volumes. Jungle funk imbues the dramatic “Nothing You Can Tell a Fool” as Gray scolds with truism and Johnson again twirls slippery slide licks. The spooky “Mean Streak” is neo-noir. The Tom Waits’ title track finds Gray “low down” and more bluesy as much by instinct as design. From the street poet to the “Bard,” Dylan’s “Down in the Flood” makes palpable the lyrics “Crash on the levee, mama, water’s gonna overflow” with a redolent Delta vibe as thick as Mississippi mud.

The jaunty country-rock of “Mayfly” is a bittersweet paean to a special lass. The swamp-rocking “Jelly Roll” drives hard while Gray ponders “Anything I want, I only had to ask… Too bad I never asked to make that last.” He plaintively implores the subject of “Jackie Ray” with “I want you to be happy… I want the sun to shine on you” even as the dark blue shade of the thumping backing track casts a shadow over the request.

Delta Moon is as deep and evocative as a late night stroll down the back roads of Mississippi. Like figurative hell hounds, Gray and Johnson haunt the blues trail of the mind, spirit and body.