Dennis Jones :: BOTH SIDES OF THE TRACKS 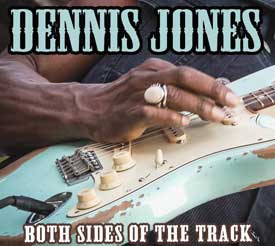 Both Sides of The Tracks is Dennis Jones’ fifth album on Blue Rock Records. He wrote nineteen of the tracks for this album and then picked his favorites. He and his band have been playing some of the songs for a while, so “they transferred well in the studio,” says Jones. “A few songs kicked my ass, but I’m very happy with the results. I have a great new band and the support of musicians and friends that I’ve known and played with over the years.”

Dennis’s feet are firmly rooted in the past, yet his heart and soul are connected to the present. He writes songs that seamlessly blend the best of both worlds, presenting a unique and contemporary style of American rock and blues. High-energy stage performance, sizzling hot guitar solos, smooth and soulful vocals are all backed by a rhythm section that is second to none… this is Dennis Jones. This band rocks the blues!

Both Sides of The Tracks spent months ranked in the Top 10 on several blues and roots charts, including a long stint in the top 2 on Smokestacklightin, adjacent to ZZ Top and other major artists.

Born and raised in Baltimore, Maryland, and now based in Los Angeles, California, Jones continues to pursue his musical goal of becoming a top entertainer in his field. Since 2003, Dennis Jones has released four successful albums, and a self-produced DVD, on his own label, Blue Rock Records and all have met with rave reviews. My Kinda Blues, his fourth release, features guest artists, Kenny Neal, and Guitar Shorty, and earned a positive nod in Vintage Guitar Magazine.