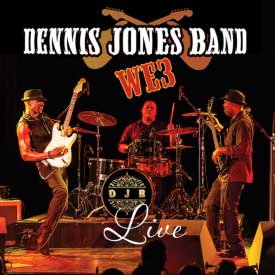 The power trio of guitar, bass and drums has long been a foundational lineup in rock ‘n’ blues with groups like Cream, ZZ Top, Stevie Ray Vaughan & Double Trouble and The Jimi Hendrix Experience building Hall of Fame careers and cementing the format. All the great trios built that reputation playing hundreds of shows. L.A. based Dennis Jones Band are proving that the power trio is alive and well, with the hard-working band already logging over 12,000 miles so far in 2018, not counting a European tour of four countries. In that spirit the road warriors honor their hard-won skills by releasing a new album, WE3 Live, captured at the Beaver Creek Brewery in the wild west town of Wibaux, Montana.

Jones has been well known as a blistering lead guitarist since winning the International Blues Challenge in 2004 as a member of the Zac Harmon Band. He has pushed forward his solo career winning acclaim as a songwriter, who isn’t afraid to tackle the controversial issues of today.

The high energy 14-song collection features selections from all five of Jones’ solo albums and a dazzling encore of the Albert King standard “Born Under A Bad Sign,” mashed up with several classic electric guitar riffs. The opening track “Blue Over You,” immediately shows off the chops of the dynamic rhythm section of Sam Correa on bass and drummer Raymond Johnson. With two clicks of drumsticks the gritty tale of a working man “When I Die” follows and Jones delivers a history lesson, namechecking the icons who have influenced him on the thumping shuffle “Passion For The Blues.” He then plays the part of man done wrong in “Stray Bullet,” built over a Robert Cray styled riff. Johnson rips a train beat for the countryfied tongue twister “Hot Sauce,” while Jones slips in a little Hendrix tone honkytonk licks on the solo. The slinky R&B groove of “Don’t Worry About Me” has a familiar Texas blues rock feel, then the trio swings hard on the bopping “Super Deluxe,” comparing his love to the popular trim line of Chevy Hot Rods. The trio keeps the party going with the funky “Enjoy The Ride,” that showcases their instrumental telepathy on intricate passages and run downs. Jones gets tender on the smooth samba “You Don’t Know A Thing About Love,” while his Stratocaster gently weeps. He then unleashes the bump and grind rebuke of a hard-drinking woman in “Kill The Pain.” The dance floor fills with swing dancers for the jazzy “Big Black Cat,” and the flow keeps moving on the Caribbean spiced rumble “Devil’s Nightmare.”

So much sound is coming off this disc you often forget it is only a trio. Jones channels Albert Collins on the Texas back shuffle “I’m Good,” then closes the set with the full bombast of ‘Bad Sign’ mashed up with ‘Voodoo Chile,’ firing off glorious sonic explosions and dive bomb wails, building to the dramatic climax, before departing the stage with a sincere “Thank you and God Bless.”

Live albums truly are a gift to the fans in the form of a keepsake to remember great shows. “WE3 Live” is a heartfelt token of appreciation to all those who have supported Dennis Jones and his power trio for over 15 years.