Derrick Procell :: WHY I CHOOSE TO SING THE BLUES 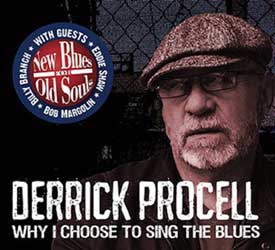 When Derrick Procell began writing songs with Grammy winner Terry Abrahamson, he hadn’t planned on releasing the music under his own name. But as overwhelming positive feedback from other blues artists came back — all of them wondering who the singer/producer was — it became clear that Procell needed the world to hear his versions of the songs before they became hits for others. After releasing self-produced CDs under the Americana banner, Why I Choose to Sing the Blues is Procell’s debut blues album. Most of the 12 original songs were co-written with Abrahamson, while the others are solo Procell compositions.

A fiery live performer since his early days covering blues classics with his college band, Parchman Farm, Procell brings his full energy to the proceedings whether he’s playing piano or harmonica. What really sets him apart, though, is his soulful, passionate, gritty vocals. Procell has become a sought-after studio singer for television and radio ads, and his songs have been included in such high-profile programs as “The Office,” “Boston Legal,” “True Blood” and “Criminal Minds.”

Thanks to Abrahamson’s ties to the blues world, heavy hitters Eddie Shaw, Billy Branch and Bob Margolin joined Procell in the studio to enhance the tracks. It’s a record Chicago Blues Guide calls “a treasure trove of richly detailed story-songs that immerse the listener in the blues experience from the Delta to Chicago and beyond.

“Blues fans around the world who are seeking smart, powerful modern blues songs that honor the legacy of the genre’s masters will find it here. … It’s refreshing to hear an album that is entirely devoted to the service of the song. Highly recommended!” – Chicago Blues Guide