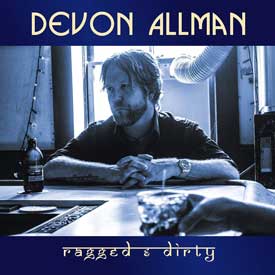 “I’ve done all my records in the South,” says Allman, who is also member of the Royal Southern Brotherhood (RSB) band. “I decided it was time to go to the electric blues Mecca, tap into that vibe, and surround myself with cats who live and breathe it. Besides producing, Tom custom wrote some songs for this record that really aligned with my path.”

Though Hambridge wrote four tunes and Devon picked three to cover, it’s his original tunes that speak to his artistic journey. “RSB has been such a deep, rich, globe trotting experience that it definitely changes your life and gives you new perspective. Anytime you’re involved in something to that degree, it will show up in your art. I think the experience has given me more depth as a writer. I’m more willing to let the groove take over and not force things vocally.

To hear how a groove takes over, check out the spontaneity of his “Midnight Lake Michigan.” Devon’s dark and ominous guitar howls push the nine-minute instrumental with a hoodoo aura. As the tension builds, the song adds Marty Sammon’s keyboards and Tom Hambridge’s percussion in a swirl of primal rhythms.

To hear Devon’s vocal range, listen to the CD closer, “Leave The City.” With only Hambridge keepin’ the sparse beat, Devon strips down and shows off his pleading, Allman-esque voice and stirring resonator guitar in this move to country blues simplicity.

“I can handle echoes. People say they hear echoes of my dad’s soul in my voice, but that I have a definitive sound. My dad says I remind him of Duane. Although I’ve never played slide in my life.”

But there is so much more to this record amid those genetic touches. Luther Allison’s “Ragged & Dirty” is a funk meets blues that provides Devon’s hot-shot Chicago studio band of bassist Felton Crews (Charlie Musselwhite and others), guitarist Giles Corey (Billy Branch), and keyboard ace Marty Sammon (Buddy Guy) along with Nashville’s Hambridge on drums room to show-off. Allman’s “Leavin’” provides the band the opportunity to play with a subdued delicacy, while “Back To You” builds from Devon’s expressive solo over Sammon’s B-3 foundation into a blistering slow blues ballad. There’s an expressive side to Devon as he and Wendy Moten handle the Spinner’s classy “I’ll Be Around.” And Devon’s cover of Otis Taylor’s haunting “Ten Million Slaves” commands our attention to bear witness to our historic injustices.

“Whether that seeking is for truth, love, inclusion, acceptance, or peace, we all have a soul that’s longing for something. Longing colors our arts in a myriad of shades. The main thing is now that I really trust my vision for songs. I go with my gut instantly. The focus now is to always get to the essence of the song and the story it’s trying to convey in the simplest way possible.”

The dirty blond hair is the same, the body posture is also the same, and there are touches in the voice that have a similar genetic connection, but Devon Allman has toiled long and hard to establish his own musical identity, separate from his mega-famous dad, Gregg Allman.

This young Allman did not come on the music scene riding the coattails of a famous parent. Allman has been living his own musical life for decades. After playing in local bands and working in Guitar Center in St. Louis, Allman formed Honey Tribe in 1999. One part blues, one part rock, and one part jam, Honey Tribe was named the 1999 Jam Band of the Year in St. Louis. Then, in 2011, his musical fate changed. Royal Southern Brotherhood was formed during JazzFest in New Orleans. It combined the vocal and musical talents of Devon, Mike Zito, and the legendary Cyril Neville with the veteran rhythm section of Charlie Wooton and Yonrico Scott. Since that genesis, the band has become one of the major new attractions on the music scene. RSB tours non-stop and has just released its second studio record along with a live Songs From The Road, all on Ruf Records.

After touring the world as a fiery guitarist and soulful vocalist in Royal Southern Brotherhood, Devon is still committed to performing dates with his own band. But with a renewed intensity.

His own 2013 Ruf Records debut, Turquoise, came a few months after the RSB’s debut launch. A little more than a year later, Ragged & Dirty is Devon’s ticket to the big show. “I have to say that playing with Royal took my career to a new level. It’s given me more confidence and a new found love for the music. I’m delighted that there’s a new shot of fire in my music.”

One can never leave a name as famous as “Allman” very far behind. There are traces of his father in his soulful voice and his uncle Duane in his innovative guitar playing. According to Devon, the name both helps and hurts. There will always be fans who come to see him out of curiosity, “But they leave having a respect for the fact that I am my own entity.

Thus as one Allman institution (the Allman Brothers Band) has “retired,” Devon Allman is poised to grow his family’s musical legacy.

Hurricane Ruth :: BORN ON THE RIVER Blues Hall of Fame to Honor Koko Taylor in Exhibit