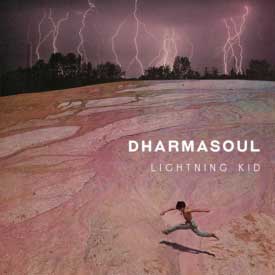 Drums, guitar, and vocals are the backbone and energy behind the new album Lightning Kid, the debut record of New Jersey based power-duo Dharmasoul. With Jonah Tolchin on guitar, Kevin Clifford on drums, and the two singing both lead and backup vocals, this duo brings their songwriting and production chops to their new band Dharmasoul. Audiences who’ve heard the two in concert look around to see who else is playing up on stage due to the fullness of the sound and the sheer energy of these musicians as they pour every bit of creativity and originality into their compositions, improvisatory performance, and expert musicianship.

Although Dharmasoul is difficult to narrow down into one genre, they can best be described through their noted influences of contemporary artists such as Medeski Martin Wood & Scofield, Vulfpeck, D’Angelo, Soulive, Snarky Puppy, and Lettuce as well as throwback influences including The Meters, Staple Singers, Otis Redding, The Allman Brothers Band, and Stevie Wonder.

Jonah and Kevin have been on contrasting yet complementary musical journeys since childhood, but each time their paths converged, they discovered an inspirational energy that they now bring to the music of Dharmasoul. Although they both grew up in Princeton, NJ, they met for the first time when they were fifteen at the 2008 National Guitar Workshop in Connecticut, a multi-instrumental camp. Their cohort had only one drummer (Kevin) and many guitar players, but Jonah and Kevin found themselves playing together on the one night out in a real club—where suddenly the audience got really quiet and listened–and later that summer they got together to jam in Kevin’s basement.

When Jonah arrived at the camp he was already a passionate blues guitar player. At the age of 15 he met and jammed with blues legend Ronnie Earl in a music shop in Keene, New Hampshire, and had the first big thrill of his musical life when Earl invited him to sit in at Tupelo Music Hall (Londonderry, NH) a few months later. After graduating from high school Jonah hit the road and started a solo performance and recording career. The first year out of high school he had released one EP (Eldawise) and a full-length record (Criminal Man) and was performing at the Newport Folk Festival (summer 2012). A year later he was signed to Yep Roc Records and the company released his next two records, Clover Lane (2014) and Thousand Mile Night (2016). Since 2014 he has had success in the streaming world, racking up over 10 million plays on Spotify. He has also collaborated and worked in the studio with notable list of musicians including Steve Berlin (Los Lobos), John McCauley (Deer Tick), Mickey Raphael (Willie Nelson), Scarlett Rivera (Bob Dylan), Ben Knox Miller (The Low Anthem) Anderson East, Sam Amidon, Greg Leisz, James Gadson, Eric Heywood, and many more.

When Kevin met Jonah at National Guitar Workshop, he was already an accomplished musician. At five he started studying piano with his mother, a classically trained pianist, and he began playing drums at ten. In high school he entered the jazz band and pit orchestra, joined a youth orchestra, and took marimba and concert percussion under the tutelage of Peter Saleh. Kevin graduated from Loyola University in New Orleans, where he was inspired by Brian Blade and Stanton Moore, jazz and funk drummers who had attended Loyola. Experiencing music in New Orleans opened him to worlds of hip-hop, neo-soul, traditional/modern jazz, Brazilian, and Afro-Cuban styles. At Loyola, he was featured in masterclass sessions with trumpeter Sean Jones, saxophonist Miguel Zenon, drummer Henry Cole, and percussionist Pedrito Martinez. At 19 he performed at the New Orleans Jazz and Heritage Festival with the Loyola Jazz Band and later with Mikayla Braun. He became an in-demand multi-stylist drummer playing with gypsy jazz groups, electronic/hip-hop, indie-folk, and singer/songwriter acts. In addition to songwriting and playing with Dharmasoul, Kevin currently teaches private percussion lessons to all ages in Princeton, NJ.

It was Jonah’s album Clover Lane that brought Jonah and Kevin back together again in 2014. During Kevin’s senior year in college, he received a Facebook message from Jonah asking if Kevin could accompany him at the SXSW festival to support Jonah’s solo release Clover Lane. The synergy between them that they had experienced years before at that Hartford bar was reignited. By 2017 the two musicians had formed a true musical brotherhood and were touring throughout the country backing up other artists as well as playing Tolchin’s original solo work.

July 1st, the duo Dharmasoul was formed and in August 2017 they recorded their debut album, Lightning Kid at Verdant Studios (Pete Weiss) in Athens, VT, with friends Brendan Moore (keys), Matt Murphy (bass), and Laurence Scudder (viola). The crew recorded the full record live, with minimal overdubs. Following the session at Verdant Studios, they added overdubs with Cindy Walker and Marie Lewey (who Jonah had worked with when he produced both Bound to Meet the Devil by Julie Rhodes, and Through These Waves for Bill Scorzari), who recorded background vocals at Fame Studios in Muscle Shoals, Alabama; engineered by John Gifford III (who engineered Jonah’s Thousand Mile Night). The album will be released in Spring 2018.

When it comes to what Dharmasoul means for them, Jonah and Kevin both reference not only their great respect for one another’s talents but also their friendship.

This project feels like something that’s been waiting for ten years,” comments Tolchin. “Yet it couldn’t have happened any sooner than it did. Lightning Kid represents a culmination of our collective influences throughout our years as music appreciators and players, ranging from folk and world music to funk, jazz, blues, rock, hip-hop, R&B, and gospel. Adds Clifford, “We don’t think about fitting into specific genres. That’s what makes our partnership so special. We have an openness and a clarity that respects and honors freedom of musical expression.”