Duncan Street :: BAPTIZED BY THE BLUES 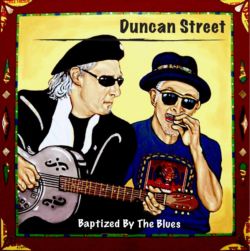 The immortal power of primal blues resides in a select group making music with the most basic instrumentation and maximum emotional expression. Topping the list, singer, songwriter and guitarist Dave Duncan has long been at his craft composing for blues and country artists. Nominated twice in the Blues Music Award category “Song of The Year” for his work with Curtis Salgado and recording two previous solo albums featuring musical guests including Delbert McClinton, Duncan has stayed busy for years in Tennessee. The release, Baptized By The Blues by Duncan Street, the hot new acoustic duo with Stan Street, cuts the fat while leaving the most succulent, meaty music to be consumed with zest.

Baptized By The Blues features ten southern flavored blues originals and a cover of a Muddy Waters’ classic. Starting the party with its steady rolling dobro guitar and honking harp, “Watermelon, BBQ and Beer” is a sing-along mantra urging fans to consume from the three major food groups. The Delta-inspired duo stomps hypnotically on “Come to Mississippi.” Shifting gears to shuffle like a Chicago combo, they create a relentless groove on “Color Me Blue,” as Street blows sweet blues harp while he kicks bass drum and Duncan sounds like two pickers on a well-worn blues lament.

Duncan exhibits his sly wit and pure blues growl on the slinky, slower 12-bar “Sharpest Marble in the Drawer.” Next up is Street’s turn to sing his blues away on the sprightly “I Be’s Troubled” and to be sure, Duncan Street plays the classic Muddy Waters signature riff with exuberance. Dave Duncan gives us another glimpse of his extraordinary fingerstyle chops on “Love Me Tonite,” a toe-tapping romantic plea.

The urgently propulsive title track, ‘Baptized By The Blues’ is written and sung by Mr. Street, and features Duncan sliding like a man possessed while his “blues brother” relates with passion. On “Shakin’ the Bacon Down,” the duo marches on a fife and drum snare drum figure containing dynamic breakdowns and a lusty metaphor. Duncan describes another femme fatale in delicious terms on the sensuous “Tater Salad Woman.” On “Go Right Back to Bed” Duncan dusts his blues via slide blistering the strings and Street’s harp wailing throughout. The minor riff-driven “The Blues Comes in All Colors” closes with a poignant declaration of the multicultural evolution of the blues. Stan Street conjures a tasty sax solo on this song to close the record on a sweet note.

Duncan Street plays their blues effortlessly as living, breathing music that only comes from deep soul and the dedication to play it right. Baptized By The Blues sticks to the ribs, shakes the booty and soothes a troubled mind.

Third Annual Wallace Blues Festival July 11-13, 2014 Imagine A Crowd This Excited? With Teeny Tucker, they will be!