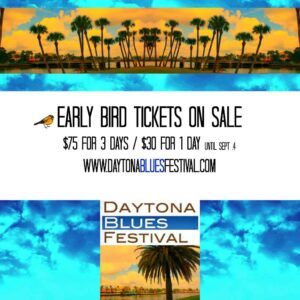 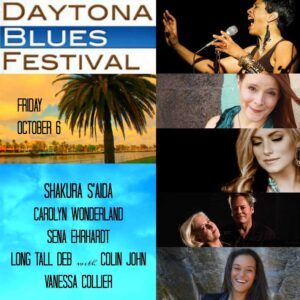 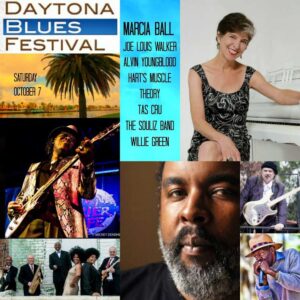 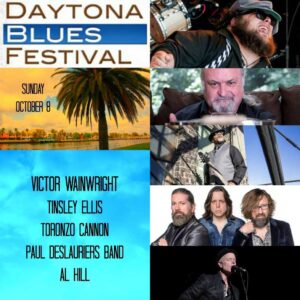 (Daytona Beach, FL) There is still time to purchase tickets at our early-bird pricing. Until Monday, September 4, at 8:59 pm, visit DaytonaBluesFestival.com to purchase single day tickets for $30 and 3-day passes for $75. After that time, ticket prices will increase to $35 and $90 respectively. And no blues fan will want to miss the 2017 Daytona Blues Festival, at Jackie Robinson Ballpark in downtown Daytona Beach, Florida.

Saturday, October 7 will again be our “Blues and Brews” day. Musically, we start with the legendary Willie Green. Next up is 2017 IBC runner-up The Souliz Band. Tas Cru then brings his immense talent to the stage. As day turns into evening, Alvin Youngblood Hart’s Muscle Theory will perform. Hall of Fame member Joe Louis Walker is next, and the night ends with the incomparable Marcia Ball.

Sunday, October 8 brings a new feature to the Daytona Blues Festival we call “Food Truck Funday.” On the stage, we have 2017 IBC solo/duo champion Al Hill. Then it’s 2016 IBC runner-up, Canadian blues masters The Paul DesLauriers Band. Chicago’s Toronzo Cannon will then lead into guitar virtuoso Tinsley Ellis. And as is our tradition, Victor Wainwright will close the festival with his backing band The Train.

But there is more going on off the main stage. Our Riverfront Stage will feature music between sets from blues dulcimer aficionado Bing Futch, Suncoast Blues Society’s 2018 solo/duo IBC representative George Worthmore, and the Blues Society of Northwest Florida’s 2018 solo/duo representative Spearman Brewers. We will also host one of the largest craft brew tastings in Central Florida on Saturday, October 7, from 2 pm until 5 pm. Three free tastes are included with your Saturday ticket or pass, and additional tastes can be purchased, 6 for $5. And on Sunday we will have a food truck rally with offerings from some of our best local chefs.

Before each day begins, there will be a blues workshop at the stadium. These workshops will be led by Dr. Tim Fik of the Bridget Kelly Band, the incomparable Red Velvet, and master bluesman Tas Cru. And after each day ends at the stadium, our legendary after parties will be held at Bahama Breeze Island Grille. Bahama Breeze is also the site of our welcome party Thursday night at 8 pm, October 5th.

Finally, please remember, we are an all-volunteer organization donating all our proceeds to local women and children’s health care services. To date we have donated over $195,000. Most of this money has gone to help mothers and their newborns with the ravages and consequences of opioid addiction. We are truly a festival with a mission we hope you will help us support.