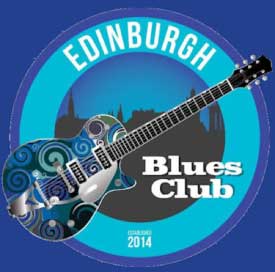 (EDINBURGH, SCOTLAND) – The Edinburgh Blues Club is a Social Enterprise established in January 2014 to harness support for regular blues events in Edinburgh. The club provides at least a monthly blues event, featuring touring blues acts from the UK and beyond, with support from the finest local blues artists. The Club won the category of “Blues Club/Venue of The Year” for 2018 at the UK Blues Awards!

The Edinburgh Blues Club features a diverse range of styles with a strong blues influence with varying elements of rock, soul, jazz, funk, country and folk. Every show is different.

The club is now the biggest blues club in Scotland and the only one to host international acts. While our shows are on public sale through various outlets, membership of the Edinburgh Blues Club is available for £12 per month. This regular payment covers entry to all our hosted shows, providing a considerable saving for regular attendees.

For their Winter schedule, the Edinburgh Blues Club will be bringing bring two of the USA’s foremost modern blues acts to the city for their only Scottish appearances. Sugaray Rayford will headline at The Voodoo Rooms on January 15th, while Rick Estrin & The Nightcats will appear at Stramash on the 23rd January. Both acts are in the UK for their appearances at the Great British Rock and Blues Festival at Bultin’s Resort in Skegness, Lincolnshire.