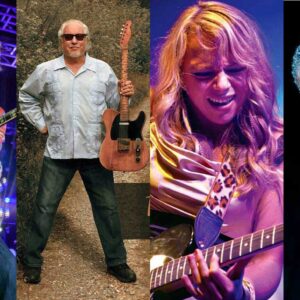 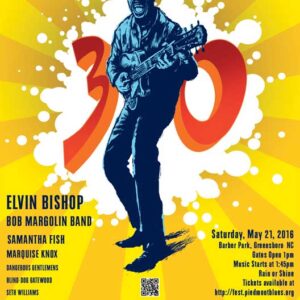 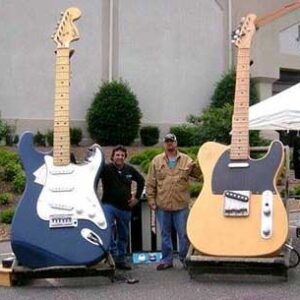 GREENSBORO, NC – 2015 Rock ‘n Roll and 2016 Blues Hall of Fame inductee, Elvin Bishop, will headline this year’s 30th Annual Carolina Blues Festival in association with YES! Weekly, May 21, 2016 at Barber Park Amphitheather in Greensboro, North Carolina. Elvin has been travelling the Blues road longer than most, and he’s got the stories to prove it – many of which are contained in the songs he writes and performs. Bishop was a founding member of the groundbreaking Paul Butterfield Blues Band in the early ‘60s. He has recorded with legends like Clifton Chenier, John Lee Hooker, and The Allman Brothers, and has had Pop success with his own 1976 smash hit “Fooled Around and Fell In Love.” Bishop’s long and varied career has included plenty of side trips along the way as well, from deep down gutbucket Blues played in smoky South Side Chicago taverns, to raucous roadhouse R&B, to good time Rock & Roll on concert stages and festivals around the world.

No stranger to the Carolina Blues Festival, our neighbor, friend, and former Muddy Waters sideman, Bob Margolin, will be returning this year. While growing up, Bob was inspired by Chuck Berry. He started playing guitar at age 15 and immediately started performing in local rock and blues bands. Margolin was hired by Muddy Waters in 1973, “…the biggest thrill was playing Muddy’s blues with him,” says Margolin. Muddy brought Margolin with him to special shows and recordings, when he sometimes didn’t use his whole band, to give him a familiar sound when working with other musicians. In 1975, they recorded Grammy Award-winning Muddy Waters Woodstock Album, Muddy’s last for Chess Records, which featured Paul Butterfield, Levon Helm, and Garth Hudson from The Band. In ‘76, Muddy brought Margolin with him to San Francisco to perform at The Band’s “Last Waltz” concert. Margolin also played on the four albums that Muddy recorded for Blue Sky Records, which were produced by Johnny Winter, and with Johnny on his Nothin’ But The Blues album. Three of those albums won Grammy Awards.

New to the Carolina Blues Festival Stage is the exciting new talent, Samantha Fish, a fiery guitarist and singer from Kansas City. Samantha’s early influences were Keith Urban and Sheryl Crow. Stevie Ray Vaughan was also a major influence on her. Though she started as a drummer at age 15, she traded the drum kit for guitar when she was 18 years old. Now, at 27, she is becoming one of the hottest blues acts, touring internationally and wowing audiences everywhere she goes with her Kansas City Blues.

After seeing Marquise Knox wow the 102,000 attendees of the National Folk Festival in Greensboro last September, the Piedmont Blues Preservation Society vowed to bring him to this year’s festival. For Marquise, blues is his heritage and a way of life. He spent his early teenage years in St. Louis mentoring under the late great Blues legend, N.E.A. Heritage Fellowship recipient, and Grammy Award winner, Henry James Townsend. Marquise’s talents have earned him performing rights with some of America’s most notable blues performers such as blues legend and Grammy Award winners B.B. King, Pinetop Perkins and David ”Honeyboy” Edwards (the latter two also NEA Heritage Fellows). “When you listen to Marquise – now 25 years old – you get the sense that this is what those masters must have sounded like as young men. Marquise’s blues are so transparent and bare. It’s so easy to feel his music as totally legitimate. That’s what makes it so appealing. That’s what makes Marquise Knox special. He’s the whole package. A throwback blues master on the rise. Anybody believe in reincarnation?”

The Piedmont Blues Preservation Society is excited to bring these talented artists for the 30th Annual Carolina Blues Festival. We’re showing the best of the ‘old guard’ and that of the new, making for an exciting and enjoyable day at the hidden jewel of Greensboro, Barber Park Amphitheater. Along with the outstanding line up, the festival will include arts and crafts vendors, food trucks, and the world’s largest playable Fender Stratocaster and Telecaster guitars! We hope you’ll join us.

Tickets are available online now at fest.piedmontblues.org and through Eventbrite.

Prices range from $45 general admission to $75 for Gold Circle Seating.