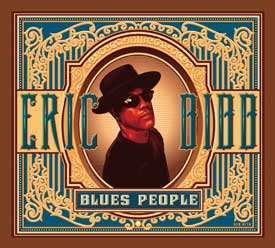 Blues People is the most recent CD from award-winning singer, songwriter and musician Eric Bibb on Stony Plains Records. Produced by Glen Scott, who also plays several instruments throughout, Blues People includes special guest performances by Taj Mahal, Guy Davis, The Blind Boys of Alabama, Ruthie Foster (who Eric has been touring with), Popa Chubby and a number of other musicians from around the world.

The 15 tracks on Blues People include a number of Eric Bibb originals, as well as collaborations with other songwriters, plus songs written by Guy Davis (“Chocolate Man”), Rev. Gary Davis (“I Heard the Angels Singin’”) and the traditional, “Needed Time,” arranged by Taj Mahal, Eric Bibb and Glen Scott.

The concept of Blues People came to Eric Bibb, who’s won the Blues Music Award as “Acoustic Artist of the Year” and been nominated for a Grammy, when he was surrounded by his musical friends at the Blues Foundation Awards in Memphis a few years back. It inspired him to create a collection of songs about change and hope, in collaboration with many of his friends in the blues and roots music realm.

“In the introduction to his classic book, Blues People, Amiri Baraka (who published it as LeRoi Jones) wrote: ‘The path the slave took to ‘citizenship’ is what I want to look at,’” writes Eric Bibb in the album’s liner notes. “That same path, along with its continuation, provided much inspiration for this album called Blues People. This record is also a tribute to the tribe of blues troubadours that I’m grateful to be a member of and it features the talents of several friends and heroes of mine. We, who traverse the highways and skyways of the planet playing the music known as blues, have become a rainbow tribe. We hail from many lands and cultures, bonded by our love of this music and the challenge of making it our own. What began in the fields of the southern United States, became a universal treasure, cherished by music lovers the world over.

My intention with these songs is to focus on some of the history of African Americans, the original blues people, as a reminder of what we’ve been through and where the music is coming from. Dr. Martin Luther King, Jr. is one of my greatest heroes. The Civil Rights movement that he is synonymous with is referred to in several songs on this album. I hope these songs will remind us that Dr. King’s dream is still a work in progress – we are still not home…”

Eric Bibb, one of the highest profile international roots music artists, was raised in New York City by a musical family; his father is noted folk singer Leon Bibb and his uncle was world-famous jazz pianist John Lewis, founding member of the Modern Jazz Quartet. Legendary actor/singer/activist Paul Robeson was Eric’s godfather, and other music icons such as Peter Seeger, Odetta and Bob Dylan were known to regularly visit the Bibb household.