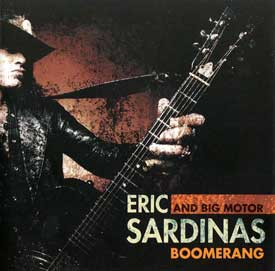 “If you throw a boomerang the right way, it will come back,” explains Sardinas about the album’s title. “And life is similar to this game with a boomerang – you sit there with a broken heart, and yet at the same time know it must go on – that you must move forward. You take a few steps forward and then a few back. That basically in some ways corresponds to the principle of a boomerang. And that’s what it’s about in the title song, but also in many of the other tracks that take on the topic in different facets and from different perspectives, then come together and make a whole.”

Working on Boomerang brought a whole new experience to Sardinas, who lives in Los Angeles, when he is not somewhere in the world on tour. “We recorded the songs in between tours, not all at once, as we had always done before,” he explains. “There was no other way – we had no choice, because our schedule was so jam-packed in the past few years with performances all around the world. On the other hand, it gave us the advantage to take our stage energy into the studio with us.  It was all only possible though, because I wrote all my songs on the road. When I came home, I had a pile of papers, napkins and other little snippets on which I kept my ideas, and then at home I brought them all together… ”

Boomerang comes three years after the release of his last album, Sticks & Stones. “That is one reason why I waited so long with my original release-idea,” Eric says about how the CD came to be.

Once again, Sardinas has continued to play on his resonator guitar and forgone the use of an electric guitar. “The resonator, specifically my signature model that was built especially for me, offers so many possibilities of expression that I pretty much have no need for special effects devices,” he explains. “I can just really have fun with this instrument and use it in so many ways, create such a power with it and get such sounds from it, that I can’t imagine playing on any other instrument.”

Kenny Neal shows his appreciation for B.B. King with Tribute Michael Falzarano :: I GOT BLUES FOR YA