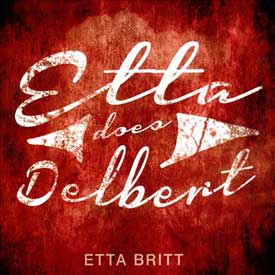 Etta Does Delbert is a collection of one of Nashville’s finest R&B singer/songwriters, Etta Britt’s favorite Delbrt McClinton songs. There’s also a bonus track of a new tune written by Etta and Kevin McKendree.  “I have been a fan of Delbert since the mid-eighties,” shares Etta. “While on the road as part of RCA Records recording group, Dave & Sugar, I had a conversation with David Hyde, our bass player. David asked, “What are you doing singing country music?” I really didn’t know how to answer except to say “It’s my job”. He then added, “But you’re not a country singer, you’re an R&B singer.” I was shocked. No one had ever said anything like that to me. He suggested I listen to some Delbert songs, so I did, and fell head over heels in love with his voice. Shortly after that, when my time with Dave & Sugar was over, I put a band together and started singing around Nashville. I was doing a lot of Deibert’s songs.

When I recorded “Out of the Shadows” for Wrinkled Records, which was released in 2012, Delbert graced that record with a duet on “Leap of Faith”. After being released from the label, my husband Bob and I decided to move forward and continue recording on our own. Upon receiving an invitation to perform on the 2014 Sandy Beaches cruise, hosted by Delbert, we decided that we should cut a new record for the cruisers, and the idea to do a CD of Delbert songs popped into my head. Bob thought it was a great idea and we .got to work immediately. We enlisted former and current members of Delbert’s band… Kevin McKendree, Steve Mackey, and Lynn Williams, to track the record. I knew they would only need one or two takes to capture these songs, and we cut 12 tracks in 7 hours. I brought in my dear friends, The McCrary Sisters, as well as Scat Springs and George Pendergrass to perform the background vocals. When Delbert heard the tracks he called me and said “I love this record and I want to do something on it. I told him he was welcome to do anything he’d like, so he sang a duet on one song, and harmony vocals on another.

What started out as a great record for the cruisers, turned into a record that I feel needs to be released to the public, and submitted to the Blues Awards, as well as the Grammys. I’m very proud of this record and feel that it showcases my voice in ways that my first one didn’t. My heart and soul was poured into “Etta Does Delbert” and I want the world to hear it.”

“Singing with Etta makes me feel like I’m fifty again. She sings her ass off!” – Delbert McClinton Info: www.ettabritt.com