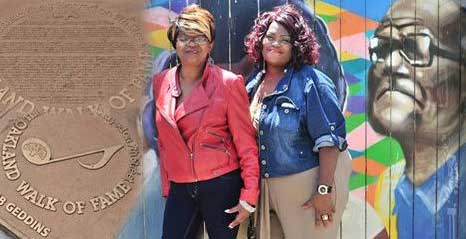 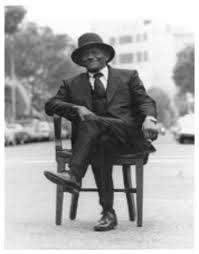 Today, more than 24 years later, Geddins remains a largely forgotten man, even to some members of his large extended family.

Irma Geddins, 55, the youngest of Geddins’ 14 children, hopes to raise awareness of her father’s accomplishments. She will pay homage to his legacy with an event on Saturday, May 23 at 2 p.m. on the 7th Street sidewalk in front of the West Oakland BART station where a plaque was recently inlayed honoring Geddins in “The Music They Played on 7th Street Oakland” Walk of Fame Project.

Following prayers in his memory, Irma will speak in remembrance of her father along with her oldest sibling, Bob Geddins Jr., 76, who played keyboards on many of his dad’s records.

The West Coast Blues Society Caravan of All-Stars will also perform at 3:30 p.m. at Hiram Hall, 8105 Capwell Drive in Oakland. The band includes soul singer Wylie Trass, who recorded for Geddins in the late ‘60s.

“I’m doing this as a tribute to our dad,” says Irma. “I’m also doing it for the great-grandkids and great-great-grandkids. There’s a whole lot of them, and I can’t get a lot of them to come because some of them live in other states.”

“I just want them to know the history of what this man did. I don’t want the legacy to die,” she says.

Geddins’ compositions continue to generate royalties for his seven surviving children. According to Bob Jr., the most lucrative have been “Mercury Blues,” first recorded by K.C. Douglas in 1948 and years later, a major hit and Ford commercial by country singer Alan Jackson; the 1953 Jimmy Wilson hit “Tin Pan Alley,” that was subsequently recorded by Little Milton, Stevie Ray Vaughan and others; and the perennial Halloween favorite “Haunted House,” originally recorded by Johnny Fuller in 1958.

B.B. King to be buried in his hometown, in Mississippi Delta J.B. Hutto & His Hawks with Sunnyland Slim :: HAWK SQUAT