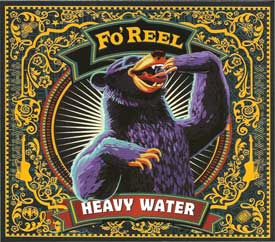 Heavy Water is a high-energy blend of contemporary blues that includes a lot of funky grooves that will make you want to move. Every song on the CD is a joy to hear, the vocals are passionate, the guitar playing is deep and full of emotion and the keyboard and horns are a driving force to the overall distinctive style and sound. Anyone who enjoys strong-driven, energy-filled music will love Heavy Water. It not only hits the listener with a variety of interesting styles like Swing and Latin-tinged Rumba, it embraces New Orleans Blues, R&B and Funk..

The band Fo’Reel was born out of a studio project that Mark Domizio created. Although C.P. Love did not perform all the songs recorded on the CD he is the singer in the touring band. Additionally, the touring band features David Barard, bass guitarist, who joined the band after the project was completed. David played and recorded with Dr. John for 40 years and also recorded with The Neville Brothers. Fo’Reel is C.P. Love, Mark Domizio, David Barard and Johnny Neel.