Frank Bey :: BACK IN BUSINESS 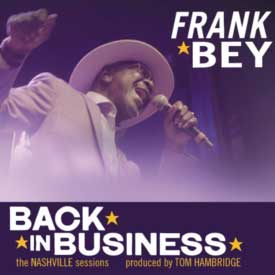 The consummate performer and man for all seasons, Philadelphia’s Frank Bey boldly declares he is “back in business now” in the opening voice over on the title track of his fourth album. Recorded and produced in Nashville by two-time Grammy winner Tom Hambridge, the title track is both autobiographical and symbolic of Bey’s inspired return to the singing career he began as a child in his hometown of Millen, Georgia and will be a fine accompaniment to the new documentary film When You Ask Me How I Feel: The Life And Music Of Frank Bey.

Bey explains the result as this; “Without a doubt, Back In Business is the recording I have always wanted to make, and I couldn’t have done it without Tom Hambridge and the excellent musicians he assembled. It was SO much fun working with such wonderful people.”

Hambridge once again uses his “Midas Touch” on the Nashville sessions by producing, playing drums and writing six of the eleven songs. The studio musicians included Delbert McClinton’s guitarist Rob McNelly, keyboardist Marty Sammon, and Tommy MacDonald on bass, who worked with Hambridge on Grammy-winning albums for Buddy Guy. The collection of soul and blues are designed to showcase the full-chested baritone and seasoned story telling skills of Bey, who has been charming audiences for decades. He spells out his plan by opening the set with a classic Chicago shuffle on the title track, then spins the tale of a notorious character from Georgia on “Gun Toting Preacher.” Bey stretches out his dynamic chops on the dramatic soul blues about hard times on “Take It Back To Georgia.”

The mood lightens for the horn-infused funk of “Cookie Jar” that features salty lyrics from Bey and ice-pick guitar from McNelly. The classic slow-burning R&B ballad “The Half Of It” could have come from the Bobby Bland catalog and is followed by a wonderful reading of the Mighty Sam McClain tune “Where You Been So Long,” his voice becoming a mix of Keb’ Mo’ and John Lee Hooker. The swinging jump blues “Better Look Out” features tasty honky-tonk piano from Sammon, and the politically charged “Ain’t No Reason” is surprising for its pop sensibility and topical relevance as it mixes the metaphor of romantic turbulence with the issue of violent divisiveness in our world. Another classic R&B love song “Blame Mother Nature” gives Bey a chance to display his vocal chops that have drawn comparisons to Lou Rawls and Bill Withers. Bey preaches the power of the blues on the hot track “Give It To Get It,” another fine song contributed by the guitarist from his Philly band, Jeff Monjack.

The showstopping slow blues “Yesterday’s Dreams” closes the set, proving why Frank Bey is known as the “Southern Gentleman of the Blues,” a master blues musician who has a unique sound of his own and has been described as Ray Charles, Bobby “Blue” Bland, and B.B. King all rolled up in one.