Frank DuMont :: LET ME BE FRANK 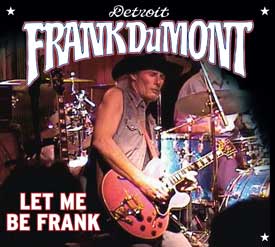 “From “Cross Road Blues” to “I’ll Be There” (!), it’s all genius! Of the eleven tracks on this collection recorded in 1991 and 2011-12, three are Robert Johnson songs and another three were by 2012 Rock & Roll Hall of Fame inductee Freddie King. My conclusion – if I can be frank about Frank – is that Detroit Frank DuMont is the greatest interpreter of these two rather disparate blues greats from two separate eras that I have ever heard. If my count is correct, DuMont plays six different types of guitar over the course of this CD, all to an amazing degree of excellence and maximal impact. His rough-hewn, deeply emotive voice, combined with his guitar wizardry (on slide, bottleneck and acoustic) make the Robert Johnson experience positively spooky. (Maybe the fact that I first listened to it on the first Friday the 13th of the year 2013 had something to do with this, I don’t know). At an average of over five and a half minutes per song, each is explored fully and with real feeling for the lyrics. It is truly an inspirational change of pace to hear someone do “Crossroads” without sloughing over the words. This is the opposite of “sloughing over”; this is probing emotional depths; and as I suggested, it can produce some eerie shudders.

With the Freddie King songs, it’s about sheer electric (rhythm and) blues power and virtuosity, featuring a smoking horn section (multiple saxes plus trombone, arranged by DuMont) and scorching keyboards (Hammond B-3 organ and piano). The lead instrumental here is of course the dual Hall of Fame song (Grammy and Rock & Roll), “Hideaway,” from 1961 [#5 R&B/#29 pop]. “The Stumble” from 1962 is another great one; and since Freddie was also a top-notch R&B vocalist, we also get his biggest vocal hit with “Tore Down” [also #5 R&B in ’61], another perfect match for DuMont’s voice. (Give the man credit: he knows he shouldn’t be singing “My Way”!)

The three other blues songs with vocals here are the chestnuts “Key to the Highway,” “Every Day I Have the Blues” and “How Blue Can You Get?” These are well arranged and well performed, but the problem is that they have been done too much and too famously by multiple others, including, most notably, B.B. King on the latter two. (It’s probably not the best idea to open yourself up to a B.B. comparison).

There is one original blues here, the excellent disc-ending, deeply layered and majestic blues-rock instrumental “Blues for Buddy,” which actually does make use of some spooky sound effects.

The big surprise (and a most pleasant one at that!) is track 8, a Detroit Frank tribute to Motown in the form of a fantastically mellow, wall-of-sound-ish instrumental version of the Jackson Five’s “I’ll Be There,” featuring 15 (count ’em!) different instruments, including the intriguing combination of French horn, harpsichord, harp and slide guitar. I really liked the baritone and tenor saxes on it, as well.” By The Noomz83, Amazon Review…

Let Me Be Frank is AVAILABLE NOW: CD Baby, Amazon or email: info@DetroitFrankDuMont.com