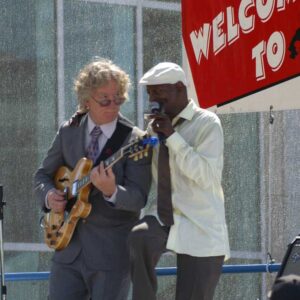 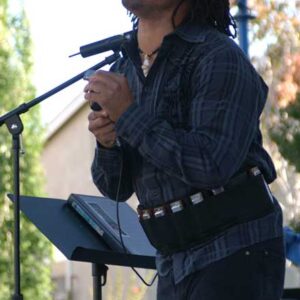 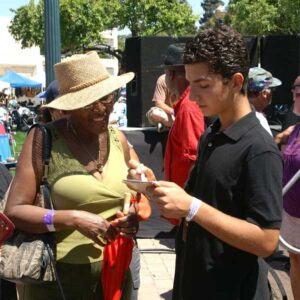 We attended the Hayward Russell City Blues Festival over the weekend of July 12-13, and it included so many memorable moments and so much talent that it is hard to nail down all the highlights.

Bassist Felton Crews led the Chicago Blues Kings into Hayward and gave us a taste of Chicago blues featuring award winning soul-blues guitarist, singer/songwriter Jimmy Burns and singer Willie Williams. Willie mixed bits of humor with strong vocals to energize the crowd, and Jimmy is the consummate showman. I think the consensus was that we didn’t get enough of Jimmy Burns and hopefully he will come back next year.

Grady Champion closed the day with a lively set. Grady is energetic, always creative, and knows how to work his crowd. The area in front of the stage was filled with dancers to the end, providing a sweet ending to a show where great music bounced off Hayward’s City Hall all afternoon.

Sunday opened with Oakland Sam who brought some original “back porch” country harp and vocals to go with some entertaining stories. Next came Hayward-Russell City’s Tribute to the late Billy Pigrum, a well-known Bay Area musician, band leader, and long-time supporter of the Hayward Russell City Blues Festival. He was a mentor both in music and in life to numerous area musicians and was repeatedly called “Dad” by many who performed on Sunday. Nearly everyone performing had either played in his bands or had contributed at his long standing Sunday Night Jam Session in Oakland. The whole show was a moving tribute to a man loved by many and was particularly highlighted by powerhouse vocals in many varieties from Earnestine, Jackie Taylor, DeJeana Burkes, SuMac, Margie Turner and Ella Pennewell. All had performed with Billy Pigrum, some as far back as the 1950s.

Oakland’s Little Willie John Jr., another Pigrum alumnus, also performed. The mix of music and stories provided a glimpse into the life of a man who continues to contribute to Bay Area blues through the musical heirs scattered throughout the Bay Area. It was a moving tribute and a highlight of the 2014 Hayward – Russell City Blues Festival.

The Russell City Memorial Blues Band a mainstay at the festival followed and was in turn followed by The Caravan of Allstars Reunion. Both bands continued the historical tour of the area’s music and provided glimpses into the diversity of the blues heritage of the East Bay. Sunday’s show closed with sets from Chicago blues veterans, Demetria Taylor, Toronzo Cannon, Taildragger, and Billy Branch & The Sons of Blues. Unfortunately, a prior commitment prevented us from staying to enjoy those acts.

Mark your calendar for next year for this fest! It is a great little grassy venue in the shadow of Hayward’s City Hall, and parking is right next door – and free. The host hotel is also within walking distance for those so inclined, and each night’s stay includes tickets to the show. Thanks to Paula and Ronnie Stewart of the Bay Area Blues Society and all the volunteers and sponsors for making this fest happen. See ya next year.