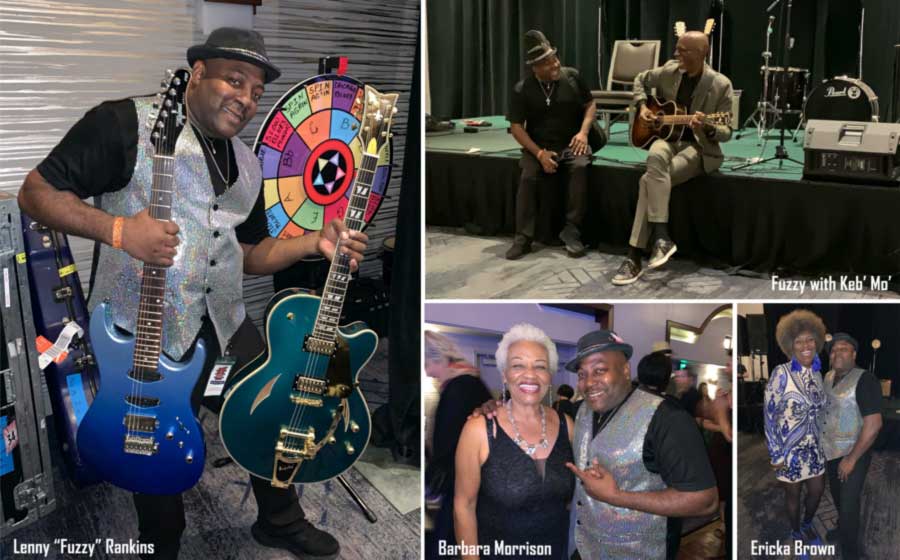 (LOS ANGELES, CA) – The Six String Showdown (6SS) is a blues guitar competition developed for musicians by musicians. The goals of the competition are threefold, the final result being the crowning of The Best Blues Guitarist in Southern California. While the competition takes center stage, promoting the blues in all of its forms is also a primary goal. The judges base their decision on showmanship, technical skills, and audience response.

The ultimate finalists were Lenny “Fuzzy” Rankins and Teddy Lee Hooker, who battled it out on Sunday, Nov 10, backed by bassist C.J. Wilson and drummer Eric Tice and judged by Dennis Jones, Sam Meek, and Steve Artea. Fuzzy was crowned winner and emcee Kenny Williams presented him with guitars from Tagima and Schechter.

Cleveland, OH native Lenny “Fuzzy” Rankins is based in San Diego, CA. He is a multi-award winner, including Grammy recognition for his lead guitar work on Ike Turner’s Best Traditional Blues album, Risin’ With The Blues. Introduced to the blues by Fro Brigham shortly after arriving in California, Fuzzy has been featured at many festivals and performed with such blues legends as B.B. King, Etta James, Bobby “Blue” Bland, and Clarence “Gatemouth” Brown. Fuzzy represented San Diego (Blues Lovers United San Diego) in 2014 and 2018 and Southern California Blues Society in 2019 at the Blues Foundation International Blues Challenge in Memphis, TN. He has released four blues albums (Not Gonna Work This Time, Good Lovin’, Take A Brotha Home, and Fuzzy – The Blues) in addition to jazz album Stirrin’ Up The Mix, all of which were nominated for awards. His new album was recorded in Baton Rouge, LA at Kenny Neal’s studio and will be released in 2020.

Of note, during Signifin Blues, Fuzzy on guitar and vocals, and Erica Brown on vocals, performed Keb’ Mo’ and Koko Taylor’s song “The Man Next Door” at the Tribute Banquet for Keb’ Mo’, followed by a solo performance by Fuzzy of Keb’ Mo’s song “Love in Vain.”

The 6SS winner from each region received a guitar ring from Jewelry by Designer Darren Simonian, a Tagima guitar, and a spot at a blues festival in their region. As a regional winner, Fuzzy has also won a slot at the Bud Light Kern River Rock n Blues Fest.

Fuzzy and his team extend a big thank you to Orion Sanders of Notorious Entertainment and the 6 String Showdown family for providing them with this awesome opportunity.