Gaetano Letizia and The Underworld Blues Band :: VOODOO DOLL AND OTHER BLUES LESSONS 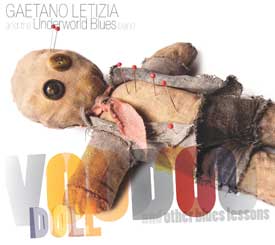 B.B. King has famously said “The blues are a simple music. Anyone can play them. But would you want to hear anyone play them?” Singer, songwriter and guitarist Gaetano “Tom” Letizia from Cleveland is someone you most definitely want to hear play the blues. He takes the “simple” forms and re-imagines them with uncommon creativity, fusing funk, jazz and a streak of moral outrage into a fiery, unforgettable experience on his breakout release.

The instrumental “Big Foot” opens with funky, jazzy sophistication, Gaetano displaying his advanced musicianship in partnership with his band. The spooky, minor key, funky title track finds him confiding in his natural growl. “Kill My Conscience” rocks hard as Gaetano bemoans “I want what I want, I want it now,” his slide guitar howling sympathetically. He rants suavely on the grooving funk of “The Devil is a Nice Guy,” his wah wah guitar and Tijerina’s smooth Hammond organ belying the venomous lyrics.

The jaunty “Blow the Blues Away” delivers the mantra “Make someone happy, do it today. Make someone happy, blow the blues away,” Gaetano’s guitar skipping the light fantastic in exultation. The remorseless, slow autobiographical blues “Torture Me” proclaims “Been playing guitar for almost fifty years, been through the sweat and been through the tears. I played my heart out, I seen the blood. Is it you, guitar? Is it you? Is it you who torture me?” his knuckle-busting solos adding proof. The wistful jazzy instrumental “Orange Sunglasses,” spotlights Gaetano’s memorable melodies. The nocturnal, slow jazzy blues of “Big Secret” closes with Gaetano defending his beleaguered hometown on Lake Erie against cheap shots through a clever coda containing “talking” with his guitar about the issue, and a rousing shuffle.

Tom Gaetano “leaves it all on the field,” combining form and content in a magnificent, passionate performance above and beyond the expected. His uniquely personal, yet universal music deserves the widest possible audience as a prescriptive for “the blues.”