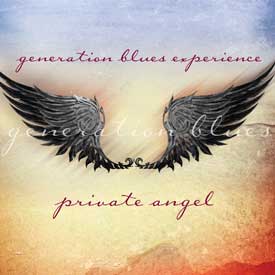 The phenomenon of exceedingly young blues guitarists has reached its logical conclusion. The Generation Blues Experience was co-founded by dedicated 12-year old singer and guitar virtuoso Ray Goren in 2012 in South Central L.A. together with veteran blues septuagenarian, Sammy Lee, and octogenarian, Jamie Powell. A true product of his “generation,” Goren learned from YouTube videos of the legends and was playing blues guitar in gigs before the age of 10. But together with Powell and Lee the band busted age and musical barriers, resulting in a landmark recording of blues power.

‘Put Love On Your Guest List’ is a snappy shuffle with Lands instructing while building to a rousing climax with the band vocalizing in kind. A live performance of ‘Ain’t No Sunshine’ ends the set on a spectacular high note as Goren sings with conviction and plays an epic, devastating solo evolving from jazzy filigree to a jaw-dropping, pyrotechnical explosion.

Ray Goren has musically time-travelled and returned to join a band of his elders with command of his instrument, vocals and feelings well beyond his years. His talent and commitment promise a limitless future to be eagerly awaited.

With two albums already recorded – the first within two weeks of the formation of the band and the second recorded live at their residency gig at Lucy’s 51 in Toluca Lake – they decided it was time to create their own music. Ray began writing songs – writing one specifically for Jamie. Sammy wrote about his home state’s troubles with Hurricane Katrina, and other band members wrote songs that Ray modified with his own style while staying true to the blues shuffles and slow blues melodies. These collaborations have resulted in Private Angel.